In January 2007, we were informed that 2007 was either likely or certain to surpass 1998 and become the world's warmest year on record by most media,including:

as well as virtually all other media you know. They justified this statement by referring to scientists who have combined greenhouse gases with the observed El Nino. Many sources, such as the New York Sun, even gave you the probability that 2007 would be the hottest year as 60 percent. They immediately added that this should "add momentum for the next phase of the Kyoto protocol", a comment that clarifies what is the actual goal of many of the people who study these questions professionally.

In the middle of the year when it started to be clear that the prediction was bogus, Phil Jones (Reuters) changed his mind only infinitesimally. It would be the second hottest year, he said. These big-shot agenda-driven scientists never have the courage to say that they were simply wrong.

However, the greenhouse gases are not too important and El Nino was replaced by La Nina. As a consequence, RSS MSU data for the lower troposphere (graph, more
graphs) show that 2007 was the coldest year in this century so far. In alarmist jargon, it was the ninth hottest year on record: the most recent year was cooler than all other years in this century as well as 1998 (by a whopping 0.41 °C) and even 1995.

In fact, if you look at the graph below, we seem to be at the beginning of a cooling trend. 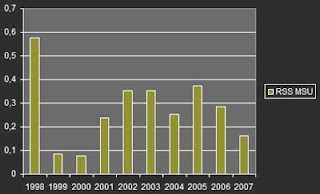 And, this cooling trend looks to continue next year:

Phil Jones et al. now forecast 2008 to be even cooler than 2007 (sanely, due to La Nina that will strongly affect at least the 4 following months) but they present this prediction as perfectly compatible with "underlying global warming" that is not "waning" in any way, despite the observed cooling. It seems obvious that the mysterious "underlying" numbers are more important for them than the numbers that are being actually measured.

Posted by Pastorius at 5:23 PM