SINCE THE 1828 JACKSON VERSUS ADAMS CONTEST, EVERY RACE HAS BEEN WON BY THE MORE JACKSONIAN CANDIDATE

We American's want tour president to be an American hero, of sorts. 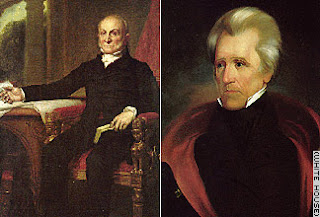 Someone who embodies what makes this nation great.

We choose them man who we think is tougher in fight - and will probably win one, rather than someone who might talk his way out of one.

[NOTE: EVEN IN 1824, JACKSON WON A PLURALITY IN BOTH THE ELECTORAL COLLEGE AND THE POPULAR VOTE.]

Nearly every single race has been one by the more natural man. The man of the people. The more common man.

Well, obviously McCain, Fred and Huckabee are the most Jacksonian on the GOP side. Rudy's okay, too. Mitt's big problem is that he seems too slick, too smooth, too smart. He can win the nomination, but - unless he can loosen up - he could lose the general election.

AND ON THE DEMOCRAT SIDE? I don't see one single solitary Jacksonian. Maybe Biden or Richardson - only it's difficult to seem Jacksonian when you've calling for retreat from Iraq for the past couple of years...

If they frame the race as Jackson versus Adams, and can cast their candidate as Jackson.

THEN AGAIN: 3-WAY RACES MAKE ANY OUTCOME IS POSSIBLE. ALL BETS ARE OFF WITH RON PAUL OR RALPH NADER ON THE BALLOT - OR EVEN BLOOMBERG OR DOBBS.

THIS IS THE DEMS BEST HOPE.

HEY: IT SURE HELP BJ CLINTON!
Posted by Reliapundit at 10:50 PM