BREITBART/AP: "US Among Worst in World for Infant Death"

The rate at which infants die in the United States has dropped substantially over the past half-century, but broad disparities remain among racial groups, and the country stacks up poorly next to other industrialized nations.

In 2004, the most recent year for which statistics are available, roughly seven babies died for every 1,000 live births before reaching their first birthday, the Centers for Disease Control and Prevention says. That was down from about 26 in 1960.

Babies born to black mothers died at two and a half times the rate of those born to white mothers, according to the CDC figures.

The United States ranks near the bottom for infant survival rates among modernized nations. A Save the Children report last year placed the United States ahead of only Latvia, and tied with Hungary, Malta, Poland and Slovakia.

The same report noted the United States had more neonatologists and newborn intensive care beds per person than Australia, Canada and the United Kingdom—but still had a higher rate of infant mortality than any of those nations.

Doctors and analysts blame broad disparities in access to health care among racial and income groups in the United States.

Not surprisingly, the picture is far bleaker in poorer countries, particularly in Africa. A 2005 World Health Organization report found infant mortality rates as high as 144 per 1,000 births—more than 20 times the U.S. rate—in Liberia.

WHEN YOU REALLY LOOK AT THE DATA, THE USA IS NOT DOING BAD AT ALL:


NONE ARE TERRIBLE.
THE USA IS SLIGHTLY WORSE THAN THE REST OF THE INDUSTRIALIZED ECONOMIES OF THE WEST BECAUSE - WELL HERE, FROM FAMILIES.COM: 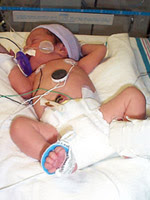 infant mortality means that a baby was outside of the womb, took at least one breath and then stopped breathing or its heart stopped beating. Miscarriages late in pregnancy are still births or miscarriages but are not part of the infant mortality statistic.

Pushing the Envelope on Viability

One reason as to why so many babies are dying is that doctors are saving more premature babies with advanced technologies. But these super preemies don't always live. The younger an infant is born and the less it weighs, the more likely it is to die. These precious little angels also contribute to the infant mortality rate. But many countries that 'beat' the United States on the list, won't use 'heroic measures' to save super preemies.

Pushing the Envelope on Fertility

Something that is interesting is that the United States also has the highest rate of super twins. (Super twins are triplets, quads or more!) Super twins do happen naturally but it is very rare. Most triplets, quads and all quintuplets or sextuplets these days are born via fertility treatments. However, super twin pregnancies are very risky and always result in premature babies--who are more likely to die.

Cut the Docs Some Slack

I'm definitely not saying that health care couldn't use an overhaul in the United States. But in fairness, if we're going to talk about the infant mortality rate being so high for such a developed nation, then we also need to talk about all the babies that were saved that frankly, had they been born elsewhere--may not have even been given the chance to live.


IT'S MORE IMPORTANT THAN GETTING THEM TO BUY CHEAP LAPTOPS.
Posted by Reliapundit at 8:58 PM

They have to find some fault, so why not this?!