WHO WON THE NOBEL PRIZE - KACZYNSKI OR GORE? 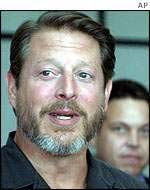 Take this test, here. See if you can identify which statements come from Al Gore's book, and which from Ted Kaczynski's manifesto (sample):

9. "And tragically, since the onset of the scientific and technological revolution, it has become all too easy for ultrarational minds to create an elaborate edifice of clockwork efficiency capable of nightmarish cruelty on an industrial scale. The atrocities of Hitler and Stalin, and the mechanical sins of all who helped them, might have been inconceivable except for the separation of facts from values and knowledge from morality."
Al Gore The Unabomber

10. "The modern individual on the other hand is threatened by many things against which he is helpless: nuclear accidents, carcinogens in food, environmental pollution, war, increasing taxes, invasion of his privacy by large organizations, and nationwide social or economic phenomena that may disrupt his way of life."
Al Gore The Unabomber

Then tell me who won the Nobel Prize for Peace this year.
Posted by Punditarian at 9:29 PM