GONE IN 60 SECONDS: HILLARY BLOWS UP 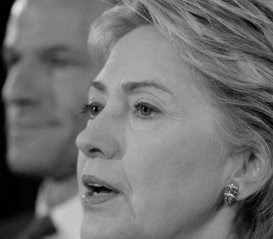 Hillary, perhaps feeling a little overconfident, pandered on the issue of granting illegal immigrants driver's licenses. She essentially endorsed Spitzer's plan in New York. ...And, to add fuel to the fire, she bemoaned the lack of the passage of "comprehensive immigration reform" a.k.a. Amnesty. 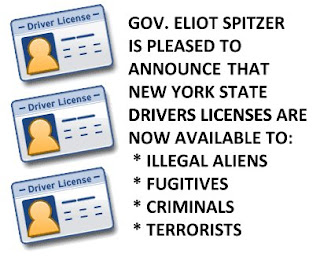 Hillary's gaffe also helps the GOP. It places our single most popular issue in the forefront of debate. When the public is given a choice between enforcing the law and granting amnesty, we win.

...It was also an unnecessary error. She could have used this moment to tack back to the center. Chris Dodd gave the answer that Hillary should have given. She may be New York's Senator, but that doesn't mean she has to reflexively endorse everything the State's Democratic Governor does. She seemed to forget this.

So, she choked. She anti-triangulated. Somewhere Bill Clinton must be "feeling her pain."

So Hillary and Spitzer want to grant drivers' licenses to illegal aliens. While that's sure to result in more bogus votes for Hillary in '08, does it mean that other law-breakers -- who are also fugitives -- can get special licenses, too?

Even the mainstream media is attacking Hillary's bizarre performance in last night's debate. 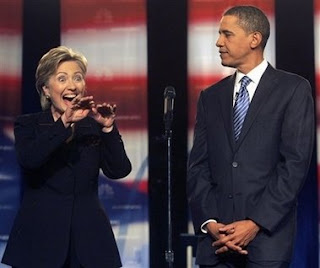 The AP: "Democrat Barack Obama said Wednesday that rival Hillary Rodham Clinton's less-than-straightforward answers in a Democratic debate raise questions about her ability to assume the presidency... Obama said he was especially concerned by Clinton's response when asked if she would release her papers from her years as first lady."

Time Magazine: "He was nowhere to be found on stage, but Rudy Giuliani's campaign shrewdly rushed to declare victory after Tuesday night's Democratic debate in Philadelphia."

In addition, during last night's debate, Dennis Kucinich related the story of his kidnapping and medical examination by aliens. Well, truth be told, I dozed off during the debate, but I'm pretty sure I heard that part.
Cross-posted at Doug Ross @ Journal
Posted by directorblue at 10:02 PM