BIRDS OF A FEATHER - PART 46: BOLIVIA, VENEZUELA AND IRAN: THE UNION OF LEFTISTS AND JIHADISTS 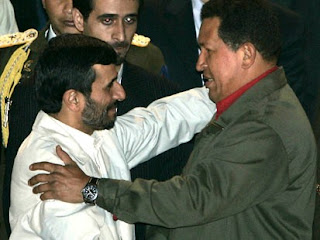 The leaders of Iran and Venezuela cemented an alliance aimed at countering the United States while the Iranian president reached out to a new ally in Bolivia and declared that together, "no one can defeat us."

After being vilified during his U.N. visit this week, President Mahmoud Ahmadinejad traveled on to friendlier territory Thursday, first stopping in Bolivia where he pledged $1 billion in investment and then visiting Venezuela to meet President Hugo Chavez.

"Together we are surely growing stronger, and in truth no one can defeat us," the Iranian leader said through an interpreter. Apparently referring to the U.S., he said, "Imperialism has no other option: Respect the peoples (of the world) or accept defeat."

PRESIDENTS EVO MORALES OF BOLIVIA AND HUGO CHAVEZ OF VENEZUELA ARE BOTH LEFTISTS.
THEY HAVE LITERALLY AND FIGURATIVELY EMBRACED JIHADISM.

THIS IS MORE PROOF THAT THE LEFT IS ALLIED TO THE JIHADISTS AND THAT JIHADOSM HAS MORE IN COMMON WITH LEFTISM THAN CONSERVATISM.
Posted by Reliapundit at 6:47 PM