WHY WOULD PRINCE CHARLES COMMISSION JOHN TAVERNER TO COMPOSE A WORK ON THE "BEAUTIFUL NAMES" OF ALLAH? 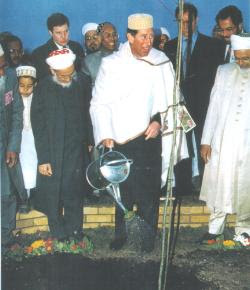 Is Prince Charles a Muslim?
One day, this man will be the head of the Church of England:

The premiere of a work by the leading composer Sir John Taverner in Westminster Cathedral next week has provoked discord because it glorifies the Muslim deity Allah.

Traditionalist Roman Catholics are planning to converge on the cathedral on Tuesday evening to protest over the work, which includes the singing of the 99 names of Allah.

Sir John’s music featured in the funeral of Diana, Princess of Wales, and his new work, The Beautiful Names, was commissioned by his friend the Prince of Wales.
Daniel Pipes says it is possible that Prince Charles is, indeed, a Muslim convert.

In a 1997 Middle East Quarterly article titled "Prince Charles of Arabia," Ronni L. Gordon and David M. Stillman looked at evidence that Britain's Prince Charles might be a secret convert to Islam. They shifted through his public statements (defending Islamic law, praising the status of Muslim women, seeing in Islam a solution for Britain's ailments) and actions (setting up a panel of twelve "wise men" to advise him on Islamic religion and culture), then concluded that, "should Charles persist in his admiration of Islam and defamation of his own culture," his accession to the throne will indeed usher in a "different kind of monarchy."

All this comes to mind on reading an article titled "Charles Breaks Fast with the Faithful in Muscat" in today's Dubai-based Gulf News, which reports on some of Charles' activities during his current five-day visit to Oman:

He toured the Sultan Qaboos Grand Mosque for almost two hours and "took keen interest in studying various sections at the mosque, including the main prayer hall." As his spokesman put it, "The Prince was particularly keen to come to the mosque today to see the fantastic building and remarkable architecture which Prince was fascinated with. The Prince has a great love for Islamic architecture and I can't think of finer example than this mosque."

He "spent a considerable time at an exhibition of Islamic calligraphy and held meetings with Sheikha Aisha Al Siaby, Head of Public Authority for Craft Industries and Taha Al Kisri, the Head of Omani Society for Fine Arts to discuss various aspects of Islamic art."

He "broke fast with a large congregation of people from different nationalities as he sat with folded legs on the floor in the open. He ate date and drank juice at the call of Iftar."

There's much more. Go read the whole thing.
Posted by Pastorius at 1:18 PM