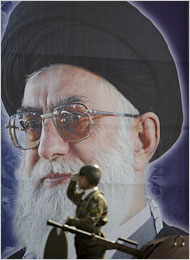 The front page of today's New Duranty Times featured a story on the Iranian Supreme Court's decision to release from jurisdiction a death-squad of fanatical serial killers:

TEHRAN, April 18 — The Iranian Supreme Court has overturned the murder convictions of six members of a prestigious state militia who killed five people they considered “morally corrupt.” The reversal, in an infamous five-year-old case from Kerman, in central Iran, has produced anger and controversy, with lawyers calling it corrupt and newspapers giving it prominence. “The psychological consequences of this case in the city have been great, and a lot of people have lost their confidence in the judicial system,” Nemat Ahmadi, a lawyer associated with the case, said in a telephone interview. Three lower court rulings found all the men guilty of murder. Their cases had been appealed to the Supreme Court, which overturned the guilty verdicts. The latest decision, made public this week, reaffirms that reversal. “The objection by the relatives of the victims is dismissed, and the ruling of this court is confirmed,” the court said in a one-page verdict.

The Astute Bloggers discussed this horrific story last Sunday, noting that Harry Reid and his cronies had elected to hold their own private foreign policy discussions with the Iranian Ambassador to the U.N. in Washington. Dirty Harry violates the Logan Act because he wants to appease a regime that exonerates serial killers, while he does his best to discourage the American people at home and dishearten our brave troops in the field. The rot from within is truly worse than the threat from abroad.
Posted by Punditarian at 9:33 PM