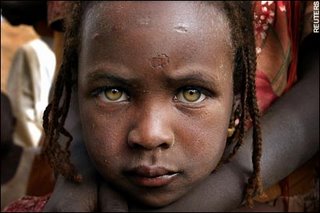 TELEGRAPH (By Kate Holt and Sarah Hughes in Juba):

Members of the United Nations peacekeeping forces in southern Sudan are facing allegations of raping and abusing children as young as 12, The Daily Telegraph has learned.

The abuse allegedly began two years ago when the UN mission in southern Sudan (UNMIS) moved in to help rebuild the region after a 23-year civil war. ... It is thought that hundreds of children may have been abused.

''I was sitting by the river the first time it happened," said Jonas, 14, one of more than 20 children who told the Telegraph they had been abused this way.

"A man in a white car drove past and asked me if I wanted to get into the car with him. I saw that the car was a UN car because it was white with the black letters on it. The man had a badge on his clothes. When he stopped the car, we got out, he put a blindfold on me and started to abuse me. It was painful and went on for a long time. When it was over we went back to the place we had been, and he pushed me out of the car and left."

The Daily Telegraph reported on Tuesday that U.N. peacekeepers and civilian staff were raping and abusing children as young as 12 in southern Sudan. The newspaper, in a story posted on its Web site, said it had gathered accounts from more than 20 young victims in the town of Juba of U.N. civilian and peacekeeping staff forcing them to have sex. The U.N. Peacekeeping Department in New York declined to comment.

U.N. peacekeepers in southern Sudan face several allegations of raping and sexually abusing children, some as young as 12, a British newspaper reported Tuesday.
The Daily Telegraph, citing an internal report by UNICEF along with interviews with more than 20 victims of the purported abuse, reported that the alleged abuse began two years ago when the U.N. Mission in Southern Sudan, known as UNMIS, arrived to help maintain peace in the region after a more than two-decade civil war. "The first indications of sexual exploitation emerged within months of the U.N. force's arrival and The Daily Telegraph has seen a draft of an internal report compiled by the U.N. children's agency UNICEF in July 2005 detailing the problem," the paper reported on its Web site. "Evidence suggests that UNMIS staff may already be involved in sexual exploitation."

The report appeared on the first day of work for U.N. leader Ban Ki-moon of South Korea, who this week became the world body's eighth secretary-general, succeeding Kofi Annan of Ghana. ... The newspaper said Sudan's government had gathered evidence including video footage of UN workers having sex with young girls.

But the UN had yet to publicly acknowledge there was a problem or even investigate, the newspaper said. The UN, working with the African Union, is now pressing the Sudanese government to admit thousands more peacekeepers to its western Darfur region, where a separate civil war has raged for three years. The government has been resisting letting the reinforcements into Darfur, calling it an attempt to recolonise the vast northern African nation. Sexual abuse charges have surfaced for decades in UN peacekeeping missions and among civilian and other humanitarian staff operating in world hot spots.

MORE AND MORE I FEEL WE SHOULD FLUSH THE UN DOWN THE TOILET. (More here.)
Posted by Reliapundit at 8:29 PM