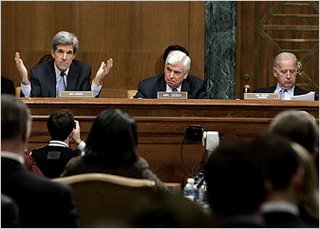 What a crew: KERRY. DODD. BIDEN.

What're they doing together?

Among Secretary of State Condoleezza Rice's interlocutors as she testified before the Senate Committee on Foreign Affairs today was a spate of senators with announced or suspected ambitions for the presidency, all eager to show toughness and resolve on the war.

WHAT DO THESE THREE SENATORS HAVE IN COMMON? (multiple choice):

(A) They are each on the Foreign Relations Committee
(B) They are pompous, vain morons who think they should be president
(C) They are demagoguing the Iraq War and putting their personal ambition ahead of national security
(D) Two are proven liars and the other idiot announced his candidacy on the Imus Show.
(E) All of the above

Notice how bored Biden looks? I get the feeling that Joe gets bored by any conversation in which he is not doing ALL the talking. AND DODD? Dodd looks like he's practicing his speech in his head. And John Francois Kerry? He looks just like he did during that Christmas in Cambodia!

UNLIKE LIEBERMAN, THESE THREE POLITICIANS SHAMELESSLY PANDER TO THEIR LEFT-WING BASE. They are worse than useless; they are a danger to our national security.
Posted by Reliapundit at 7:52 PM

Great Post! LOL. This is one of the greatest posts on this or any other blog. Dodd is an idiot. Even Don Imus, who has been sucking up to Dodd for years, clearly understands that now. Your comment about Biden's self-absorption is absolutely on target, too.