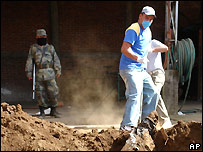 Nine bodies have been found in a mass grave in Uruapan, in the western Mexican state of Michoacan. A state official said the bodies were found buried with their feet and hands tied and their mouths covered with tape in a warehouse in the city. President Felipe Calderon sent 7,000 soldiers to Michoacan state last month in an attempt to curb drug violence.

Drugs gangs have been blamed for more than 2,000 murders in Mexico last year, including some 500 in Michoacan state. ... President Calderon, who was sworn in last month, has vowed to curb drug-related violence.

BRAVO CALDERON! These bold military actions may eventually do the trick. The Leftist candidate - Obrador, who declared himself "the legitimate president of Mexico and held his own swearing in ceremony! - wouldn't have dared to undertake these bold military actions against the drug cartels in Michoacan, (and Tijuana); Leftist politicians like Obrador, Morales and Chavez blame the demand-side and generally seek legalization of the cultivation of the drug crops. At best the Left would seek to continue to treat the ant-drug war the way they treat the anti-jihad war: with feeble law enforcement tactics.

[Note this is our third post on this matter; TAB will continue to follow this and other stories of Calderon's bold progress.]
Posted by Reliapundit at 8:29 AM