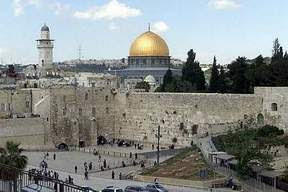 About 200 police streamed on to the hilltop compound known to Muslims as the Noble Sanctuary and to Jews as the Temple Mount, to try to quell the violence, police spokesman Micky Rosenfeld said. Witnesses said police hurled stun grenades. Police said several protesters and several officers were injured in the faceoff, but gave no further details. As many as 300 protesters barricaded themselves inside the Al-Aqsa mosque at the compound. Police were stationed near the mosque, but did not enter it.

The protesters are angry about Israeli repair work on an earthen ramp leading to the hilltop compound, which they fear will damage the mosque. 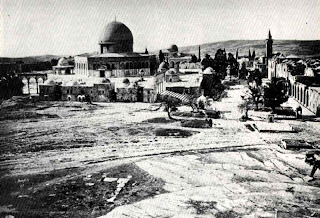 Which they "FEAR" will damage the site. An UNBASED fear deliberately stoked by the enemies of Peace and civilization: the jihado-maniacs who want to wipe Israel off the map. We predicted this earlier in the week - before anyone else.

BTW: the photo at left shows that when the Muslim/Turks controlled the region the SO CALLED "al Aksa Mosque" WAS IN TOTAL DISREPAIR AND WAS UNIMPORTANT TO MUSLIMS EVERYWHERE.

The recent protests on the Temple Mount are actually an old technique. This is meant to stir up religious fervor.

Until jihadomania is utterly vanquished, the civilized West will be at war with these barbarian terrorists and liars.

''There is no justification for what they did today, and we think it was pre-orchestrated to bring fears to the spirits of the worshippers angry about the Israeli dig,'' said Adnan Husseini, chairman of the Waqf, the Muslim trust that oversees the shrine. ... Israeli authorities have insisted that the replacement of a ramp leading to the compound, which was damaged in a 2004 snowstorm, would not harm the holy site, about 60 yards way.