The Progressives are Against States Rights, But They're All For Sanctuary Cities

Former Obama Administration official Mohammed Elbiary shows himself to be a 10th Amendment denier when he says, Federalism takes precedence over States Rights: 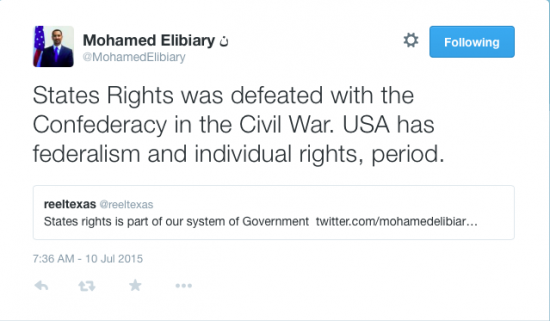 Meanwhile, it's obvious they have thrown the full weight of their support behind Sanctuary Cities, even when it means Americans are murdered:


After laying out the facts of the murder case, Kelly then played a clip of reporter asking White Press Secretary Josh Earnest about Mirkarimi’s decision to which Earnest declined to comment “as it relates to this specific case.”

Following the clip, Kelly rebuffed Earnest by stating that “[t]his cannot be turfed to Homeland Security” and “[t]he White House owes the public an answer, a direct, straightforward, simple answer because it was this administration that apparently stopped a measure to combat sanctuary cities like the one in San Francisco in the first place.”

After having expressed the need for Congress to mandate that local authorities cooperate with ICE in a congressional hearing on March 19, Kelly explained that the Obama White House joined with “the ACLU, immigrants rights groups and others” to have Saldaña undergo “a shocking about-face” on the issue and essentially reject the pleas she had made the day before.