Obama and Hillary had lunch today at the White House: 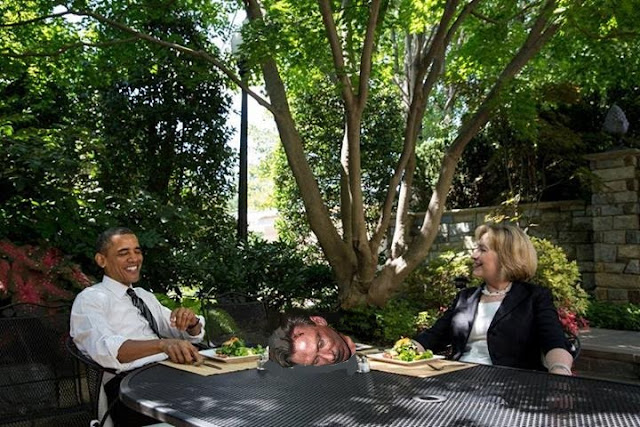 That's a photoshop - putting the head of murdered Ambassador Chris Smith right in front of Obama and Hillary - the two people most responsible for allowing Smith and three other courageous Americans to be murdered by islamists in Benghazi.

It's a shocking photoshop - and I apologize to Smith's family for making and posting it, but Obama and Hillary are more disgusting than the image is shocking.

In a figurative sense, the image is actually very "realistic" - and truthful: for Obama and Hillary go on laughing and preening and posturing... while Smith and his three colleagues' bodies lie a-mouldering in their graves.... and scores of important questions about Benghazi still unanswered... as if nobody can be held accountable.

Obama and Hillary both deserved to be impeached for abandoning Smith and the three others in Benghazi and for lying about it and covering it up.

Yet here they are smugly mugging for the state run media.