Another One Of Obama's Green Energy Investments Fails: Consumer Report's Fisker Test Car Farts Out With Less Than 200 Miles On It

If that was not penis-shrinking enough for Barack, now Consumer Reports has bought a Fisker to test drive, only to have it break down - with a "major fault" - with less than 200 miles on the car.

Read it and weep, or laugh, as you will.

We have owned our car for just a few days; it has less than 200 miles on its odometer. While doing speedometer calibration runs on our test track (a procedure we do for every test car before putting it in service by driving the car at a constant 65 mph between two measured points), the dashboard flashed a message and sounded a “bing“ showing a major fault. Our technician got the car off the track and put it into Park to go through the owner’s manual to interpret the warning. At that point, the transmission went into Neutral and wouldn’t engage any gear through its electronic shifter except Park and Neutral. 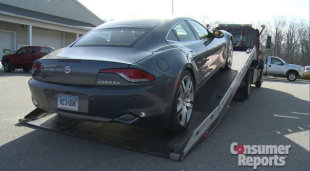 We let the car sit for about an hour and restarted it. We could now engage Drive and the same error message disappeared. After moving it only a few feet the error message reappeared and when we tried to engage Reverse the transmission went straight to Park and again no motion gear could be engaged. After calling the dealer, which is about 100 miles away, they promptly sent a flatbed tow truck to haul away the disabled Fisker.

We buy about 80 cars a year and this is the first time in memory that we have had a car that is undriveable before it has finished our check-in process.

Has the Obama Administration made any successful investments in "Green Energy"?
Posted by Pastorius at 8:48 PM

It is the same car, Will. You have a very good memory.