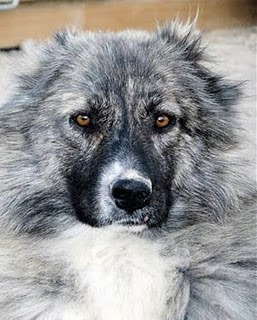 Muslims do hate dogs (see previous post) and as with their other hatreds, they put this hatred into action.
A stray dog started hanging around the gate of the allied military compound, but that was not enough to protect him:

Because its against the rules to allow stray dogs to live inside the base, the best his carers could do was allow him to live near the soldiers who worked at the front gate. Since there was nothing stopping his access to the street he was routinely targeted by locals and sustained numerous and horrific injuries. In the 4 months that Wylie lived at the gate (Feb-May 2011), he had his ears cut off loosing sections of skin on his head, had my muzzle sliced open, had half his tail cut off, was stabbed in the chest, he had his penis severed and then thrown in front of a car before having his back legs cut.

But that was not enough to keep him down, or to prevent civilized human beings from helping him.

"Once we stitched for 90 minutes without anaesthetic," she said. "I can't fathom how much pain he must have been in but he just lay there motionless, looking up at us. He didn't bite or growl once."

Wylie's refusal to submit became legendary around the Kandahar base.

But when he was grabbed again by local thugs and thrown under a passing car it seemed his luck had finally run out.

"It was the first time I felt defeated because Wylie had become a symbol of Kandahar," Jensz said. "So many soldiers identified with him but I just couldn't work out how to keep this dog alive. That was the day I decided I had to take him with me."

With the help of a British and a US soldiers' animal companion fund, Wylie was evacuated to London via Kabul six weeks ago to begin the long road of quarantine hurdles that Jensz hopes will eventually bring him to Australia and her wildlife rescue property just outside Canberra.

Ours is a civilized society.

He now has more than 100 friends who regularly post updates of his progress and donate money to his fundraising site. Wylie is visited in British quarantine almost daily by strangers who have heard his story from returned soldiers.

"The humanity just makes me speechless," said Jensz, who hopes to set up an Australian soldiers' animal companion fund on her return next month.

Posted by Punditarian at 3:09 PM

Should have been a rabid dog like "Cujo" near the gates; these moron Muslims would have thought twice about messing with it then...