SARAH GLIDDEN'S "WAITING ROOM" MAY NOT BE WORTH SITTING INSIDE

Sarah Glidden, the would-be graphic novelist who put together "How to Understand Israel in 60 Days or Less" that otherwise takes a negative stance on Zionism, has come up with some new potential propaganda called "The Waiting Room" documenting Iraqi refugees in Syria. The article about this says:

Called The Waiting Room, the 20-page story continues the calm and considered documentarian style she employed in How to Understand Israel... and presents an incredibly depressing but touching portrait of what life has been like for Iraqis who've been living in Syria since the American invasion of 2003.

But there's problems abound. First up, this panel: 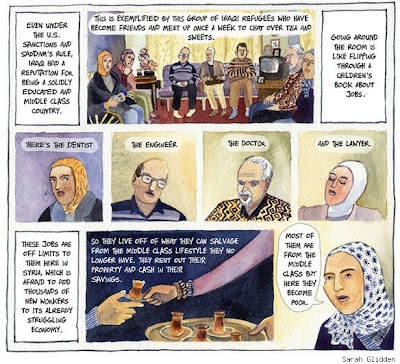 Really, was it that solid in education? Saddam lived and died a Muslim, holding a Koran at his trial, and his government run universities would most likely have incorporated the Religion of Peace and anti-Israelist education into their curriculum (one of the other panels at the political cartoon site says the colleges were free, which sounds vaguely similar to the notions some communists/marxists/socialists have of how to do things). I'm not sure you can call that solid stuff. Nor can a religion/education/political system that calls for jihad, oppression of women, and considers Jews "sons of apes and pigs" be something to learn from. And why do I get the vibe these refugees wouldn't give a crap about how Saddam fired scud missiles at Israel back in 1991, causing plenty of people, myself included, to have to hide in airtight rooms? 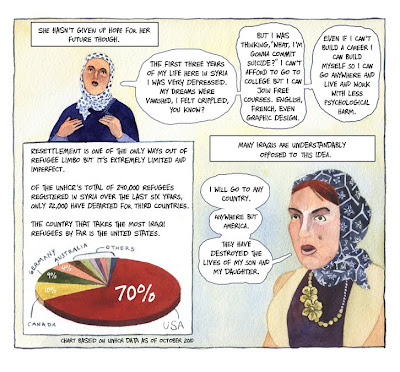 So the woman drawn in the panel blames America for her misfortunes, not Saddam for the oppression, nor the terrorists who went on a rampage after the US raid. Perhaps she might want to consider that nearly a decade ago, when the raid took place, there were terrorists going through Syria to get to Iraq, and Syria helped and encouraged many to do so. But she probably won't. The 7th panel at the political cartoon site has the interviewee saying, "America set fire to my country and we lost everything". Not exactly. There is a legitimate case that could be made that the US military didn't do a good enough job at defeating the invading terrorists properly at the beginning, and this is what led to their misfortunes. But it appears she's only blaming America for invading in the first place, and not the jihadists who crossed through Syria into Iraq. What, they don't have any responsibility?

Glidden is definitely following in the footsteps of the incomparable Joe Sacco in becoming a graphic reporter on the trouble spots of the world. While there’s only one Sacco, Glidden is finding her own place in the field with her work.

When they start comparisons with a foul fiend like Sacco, something is wrong.

Speaking of which, I found an AP article about Sacco and his Footnotes in Gaza propaganda on Haaretz, which tells a few details worthy of note:

The American-Maltese artist's latest book, "Footnotes in Gaza," chronicles two episodes in 1956 in which a U.N. report filed Dec. 15, 1956 says a total of 386 civilians were shot dead by Israeli soldiers - events Sacco said have been "virtually airbrushed from history because they have been ignored by the mainstream media."

"It's a big exaggeration," said Meir Pail, a leading Israeli military historian and leftist politician. "There was never a killing of such a degree. Nobody was murdered. I was there. I don't know of any massacre." Sacco's passion for the Palestinian cause has opened him up to accusations of bias.

Jose Alaniz, from the University of Washington's Department of Comparative Literature, said Sacco uses "all sorts of subtle ways" to manipulate the reader.

"Very often he will pick angles in his art work that favor the perspective of the victim: He'll draw Israeli soldiers or settlers from a low perspective to make them more menacing and towering." Alaniz also said Sacco draws children "in such a way to make them seem more victimized."

Sacco himself admits he takes sides.

"I don't believe in objectivity as it's practiced in American journalism. I'm not anti-Israeli ... It's just I very much believe in getting across the Palestinian point of view," he said.

I'm afraid he only takes one side, and his claim that the massacre took place, from what we can tell via Pail, is clearly a lie just like any claims that Israel drove Arabs out of their homes in Jerusalem, when it was the other way around, as can be read about in this History News Network article (via Richard Landes). There's a saying that "war is deceit", and many jihadists go by this too: this was likely a lie spun by anti-Israelists in the Islamic world, and Sacco followed up on it willingly.

But to say that American journalism is objective is about as convincing as to say that even FOX News is incapable of committing anti-Israel bias just because they're allegedly conservative (and Jeff Dunetz has already made clear they're no more reliable than CNN). Sacco's merely suggested he's a Chomskyite (he was born in Malta, of course). And he can use all the moral equivalence he likes, but it's clear he only cares about the "palestinian side" and doesn't care by contrast if there's no such thing as a "palestinian Arab/Islamic people", and that the name palestina was originally coined by the Romans circa the Bar Kochva revolution, later revived by the British to undermine Israel, by people like Christopher Mayhew and Michael Adams.

Sacco's whole attack on American journalism is laughable, since if there had been a massacre, you can be sure creeps like Walter Cronkite would've said something about it decades ago. It's a rather ironic attack by a leftist against other leftists, implying he doesn't think they're biased enough for his tastes. Which seems to be quite a trait for some leftists - their own aren't good enough for them.

And back to Glidden now, it's tragic that the artform of comics is being abused by such loathsome people to attack Israel and America. I wonder if her next destination will be to attack the Israeli army (which I served in when I was 19-21, even if it was only in supplies duties)? She is just as bad news as Sacco.
Posted by Avi Green at 2:04 PM