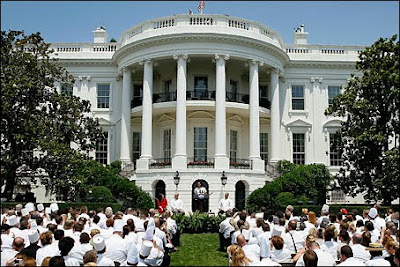 Are you kidding me? School lunches need chefs?

The chefs, including national stars such as Rachael Ray, Tom Colicchio and Cat Cora, and an army of unknowns who work in restaurants, food banks and culinary schools, hailed from 37 states. Each has accepted a White House mission to adopt a school in his or her community and work with parents, teachers and cafeteria workers to educate children about food and nutrition. That might include developing healthful recipes for cafeterias, offering cooking lessons or helping a school to plant a garden.

"You are all at the heart of this initiative because if anyone understands nutrition and food, it's the folks sitting here in their whites today," Obama said, referring to the traditional chef uniform. "You know more about food than almost anyone – other than the grandmas – and you've got the visibility and the enthusiasm to match that knowledge."

...Chefs said they were undeterred by the hard work ahead....

Whatever happened to "Too many cooks spoil the broth"?

From another WaPo puff piece on the same topic:

..."What we are feeding our children is an outrage. We should be marching with picket signs and pitchforks in revolution," said Cathal Armstrong of Restaurant Eve in Alexandria....

In the months since [the January 2010] meeting, the chefs have taken the first steps to make real the lofty goals of Michelle Obama's Let's Move! initiative, which aims to end childhood obesity within a generation. [Chefs] Gray and Mendelsohn began teaching cooking classes to hundreds of students and parents...

What? They can't open a cookbook on their own? Sheesh!

From cradle to grave is upon us!

Continuing now with an excerpt from the WaPo article:

At the very least, the combination of chefs and reality-style makeovers is smart marketing by the White House. But if the nearly 1,000 chefs who have signed on to the program catch the same fever as their Washington counterparts, the hope is that the program could spark a real "Food Revolution," Jamie Oliver-style. A thousand forks of light, if you will.

"A thousand forks of light"? Consciously or unconsciously trying to make a connection to this 1988 speech given by George H.W. Bush, I guess.
Posted by Always On Watch at 8:03 AM

Chefs are masters are making food visually appealing and delicious tasting. Neither has anything to do with "healthy" eating. Restaurant food is notorious for being fat and salt laden, thus making it taste great but nearly the least healthy food in the world. Just look at Michelle – she is not a poster child for healthy eating.

If she truly wants to project a positive image, why doesn’t she do something really useful like learn to do her own hair and dress herself, thus saving us taxpayers thousands of dollars. We would appreciate that.