For someone who supposed to be so dumb, it's amazing she gets all the important questions right.

She's opposed to KSM's NYC trial; in favor of smart-profiling; sees Hasan for what he is; wants to drill here; knows when life begins, (it ain't above her pay grade) and so on. 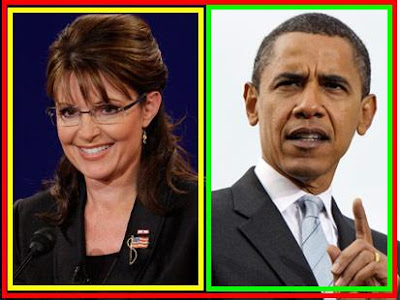 That's because the big tough questions a POTUS faces and which a POTUS must be "the decider" in aren't IQ questions at all; they're MORAL AND POLITICAL QUESTIONS.

And getting them right takes having GOOD BASIC AMERICAN VALUES DEEP IN YOUR SOUL, and not cleverness or loquacity.

There were smarter and better educated men than Reagan and Lincoln, but none more suited to lead this great nation.

ALSO: It helps that unlike Obama and the Left, Palin loves America and doesn't think we have to apologize for jack shit.

But that's because she has AMERICAN VALUES, not chic postmodernistic euru-socialisitic values.

She wouldn't have dithered on the Iranian rebellion, or Afghanistan. Or have backed Zelaya. Or bowed down to the Kings or Emperiors. Or attempted to take over the healthcare industry.

She'd've been a better POTUS than Obama.
Posted by Reliapundit at 11:02 PM