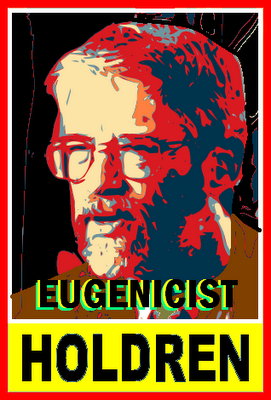 First, why is there a science czar? Second, if there has to be a science czar, why does he have to be a complete wackjob who believes in crazy non-science? Third, why is he dictating anything to the FCC? Fourth, is this even legal?

I could come up with a dozen more questions, but the answer to all of them, ultimately, is that none of this should be taking place.

(CNSNews.com) – John P. Holdren, director of the White House Office of Science and Technology Policy, advocated having the Federal Communications Commission force radio and television stations to surrender free time for advertisements calling attention to what he called “the population-resource-environment crisis.”

He cited, as examples of the type of advertising he was talking about, ads produced by Planned Parenthood, the Sierra Club, and Zero Population Growth (ZPG).

Holdren made his argument for using the FCC to advance his vision for population control and environmentalism in the 1977 book, Ecoscience: Population, Resources, Environment. Holdren co-wrote the book with renowned population-control advocates Paul R. Ehrlich and Anne H. Ehrlich.

“In the United States a great step could be taken merely by requiring that both radio and television assign some of their commercial time to short public-service ‘spots’ calling attention to the problems of population, resources, and environment,” Holdren, Ehrlich and Ehrlich wrote.

They argue that programming in developing countries “ought to be informational, even if presented as entertainment,” and ought to give people “information on the need for population control and the ways it might be achieved.”

That's called "colonialism." Neither we Americans nor those in the developing world are his minions to be lied to, controlled, exxploited, or eradicated.

This is, of course, the man who believes in forced sterilizations and poisoning the drinking water to control the population.

The mere belief in a population problem is, of course, just about the height of insanity. Not one shred of evidence exists for it, but it has been a well-established fact since 1961 that population decline is a major, major problem.

If he's worried about resources, I've got the solution right here: the free market. People eat too much meat, which is very inefficient in terms of energy. If people paid $30 for that hamburger that actually costs $30, instead of paying $4 because of socialist farm subsidies, that problem (which I'm not even sure is really a problem anyway, particularly with the rapid worldwide decline in population) would instantly disappear as the amount of food grain on the market would skyrocket.

You could not make this stuff up if you tried.

So they're controlling the both the networks' programming and advertising now, which is going over really well.
Posted by nunya at 4:43 PM