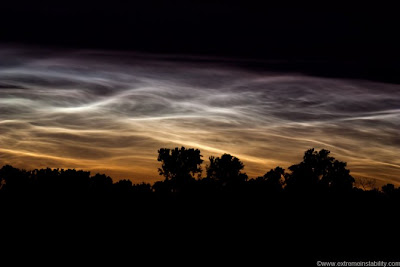 Color me suspicious.
More heat means more ice. Right! Got it.
From Wired:

Mysterious, glowing clouds previously seen almost exclusively in Earth’s polar regions have appeared in the skies over the United States and Europe over the past several days.

Photographers and other sky watchers in Omaha, Paris, Seattle, and other locations have run outside to capture images of what scientists call noctilucent (”night shining”) clouds. Formed by ice literally at the boundary where the earth’s atmosphere meets space 50 miles up, they shine because they are so high that they remain lit by the sun even after our star is below the horizon.

The clouds might be beautiful, but they could portend global changes caused by global warming. Noctilucent clouds are a fundamentally new phenomenon in the temperate mid-latitude sky, and it’s not clear why they’ve migrated down from the poles. Or why, over the last 25 years, more of them are appearing in the polar regions, too, and shining more brightly.

Nobody knows for sure, but most of the answers seem to point to human-caused global atmospheric change.

This just in; firm and copious bowel movements in bulls are caused by Global Warming.
Posted by Pastorius at 2:40 PM