"The authorities say that most of those detained are immigrant youths who feel disenfranchised in Danish society."

NONSENSE. This is denial, pure-and-simple.

Denmark has one of the most extensive welfare state's in the world. It has been immigrant friendly for years - UNTIL most of the Muslims stopped desiring to assimilate.

The "immigrant youths" who are rioting ALL OVER Denmark are no different than the youths who rioted ALL OVER France, recently: they are UNLIKE their parents and grandparents who wanted to assimilate; they do NOT want to assimilate; they have been radicalized by the mosques and imams funded by the Saudis and they are the "muscle" - the thugs - who are helping these radical effort to transform their neighborhoods into sharia enclaves - FOOTHOLDS from which to make the rest of their hosts nation into dhimmis or under the rule of sharia. 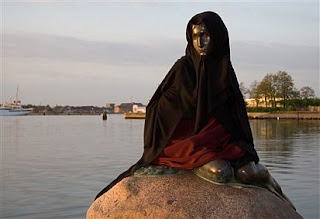 It is reverse colonization and a culture war by stealth and by intimidation.

It couldn't work without the help of the postmodern left. The postmodern left has for years been softening up the host's connection to its own culture. This has left half the native population 50% disarmed and the entire nation 50% less defended than it might otherwise be.

The first step to REARMING the nation for its self-defense is to get the left to abandon their denial.

THIS MEANS ACCEPTING THE RIOTERS FOR WHO AND WHAT THEY ARE: a vanguard of the enemy; the first wave in their local battlefield in WW$: Global Jihad.

The longer people in the West wait to accept this, the worse the casualties in the war will be.
Posted by Reliapundit at 9:55 PM