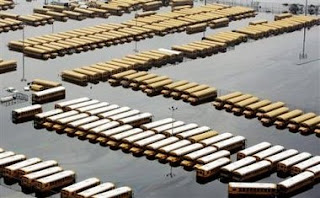 In the midst of wild accusations about the California firestorms, news comes out bearing on Katrina, the largest natural disaster in U.S. history, which provided Democrat politicians and the mainstream press (including the NY Times, the Washington Post, the LA Times, ABC, CBS, NBC and CNN) with an opportunity to spread distortions and outright lies in order to try to embarrass and destroy a sitting President.

Lies were published about the amount of aid that was provided, the timing of the aid and the number of deaths; and also that bias supposedly motivated the distribution of aid. The press basically said that poor people were largely ignored, while wealthy people were helped. The press also claimed that President Bush was responsible for the poor performance of the levees – performance that was sealed years ago due to local corruption and questionable decisions by the Corps of Engineers.

This sorry situation is now being reprised in the context of the dreadful fires in California. The Lt. Governor, and Senator Boxer, both Democrats, yesterday blamed President Bush for the extent of the damage – saying there were not enough National Guard on hand because of Iraq. It is so sickening how Democrats try to politicize everything that happens in life. The charges were untrue and later somewhat taken back. There are plenty of Guardsmen, equipment and airplanes available; the problem has been that conditions wouldn’t allow for their use. Perhaps these Democrats should get some facts straight before they open their mouths.

Winston Churchill once said that a lie goes around the world while the truth is still getting its pants on. The left counts on this. The details about Katrina aid have not yet been completely enumerated, but this report about the 2004 Florida hurricane aid hits the mark and puts a different face on these lies.

“Floridians who lived in low-income areas received twice as much federal disaster aid on average as residents of wealthier areas after four hurricanes hit the state in 2004, an analysis by three newspapers found.

The Panhandle was the only region where federal aid did not appear to correlate with income level, the newspapers reported. Lower-income area residents there averaged $2,245, compared with $2,149 for residents of high-income areas.

The newspapers' analysis did not include help received in addition to cash payments, such as free shelter or food.” AP

Editorial Note: The people of Louisiana just showed with their vote for governor what they thought of the Katrina performance of the Louisiana Governor Blanco, a Democrat.

“Jindal, a 36-year-old Republican, will be the nation's youngest governor. He had 53 percent with 625,036 votes with about 92 percent of the vote tallied. It was more than enough to win Saturday's election outright and avoid a Nov. 17 runoff…..

Political analysts said Jindal built up support as a sort of "buyer's remorse" from people who voted for Blanco last time and had second thoughts about that decision. Blanco was widely criticized for the state's response to Hurricane Katrina and she announced months ago that she would not seek re-election.”

Posted by RussWilcox at 8:11 PM