The Country and I Are Not Ready for Hillary 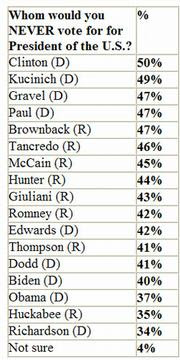 Poll: Half say they would never vote for Hillary for president
Saturday, October 20, 2007, naplesnews.com (Excerpt)

"While she is winning wide support in nationwide samples among Democrats in the race for their party’s presidential nomination, half of likely voters nationwide said they would never vote for New York Sen. Hillary Clinton, a new Zogby Interactive poll shows.

sadly: ready or not, her she comes.

unless we stop her.