BIRDS OF A FEATHER PART 43 - CASTRO AND THE LIB DEMS 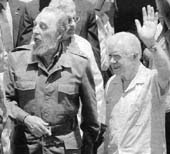 Clinton leads Obama in the race to be the Democratic nominee for the November 2008 election, and Castro said they would make a winning combination.

"The word today is that an apparently unbeatable ticket could be Hillary for president and Obama as her running mate," he wrote in an editorial column on U.S. presidents published on Tuesday by Cuba's Communist Party newspaper, Granma.

... Castro said former President Bill Clinton was "really kind" when he bumped into him and the two men shook hands at a U.N. summit meeting in 2000. He also praised Clinton for sending elite police to "rescue" shipwrecked Cuban boy Elian Gonzalez from the home of his Miami relatives in 2000 to end an international custody battle....

He said his favorite U.S. president since 1959 was Jimmy Carter, another Democrat, because he was not an "accomplice" to efforts to violently overthrow the Cuban government.

Sixteen years after Dwight Eisenhower broke off diplomatic ties with Cuba, Carter restored low-level relations in 1977 when interest sections were opened in each country's capital.

Castro is a tyrannical murderer whose "revolution" plunged Cuba - at the time the second richest nation in the Caribbean - into poverty. Now - after 50 years of SOCIALISM, only Haiti is poorer.
Yet, he is still the darling of the leftist chic degenerati of Hollywood WHO ALSO LOVE OBAMA AND HILLARY.

Naturally; they're birds of a feather. MORE HERE.
Posted by Reliapundit at 7:09 PM