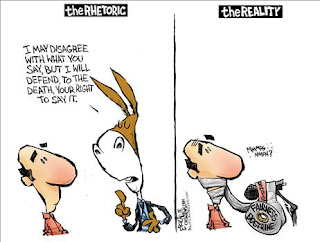 The Fairness Doctrine is affirmative action for liberalism.--Newt Gingrich

I haven't bothered to post on the weak attempt by liberals to revive the Fairness Doctrine up until now because I knew it didn't have a chance in he** of passing!! Yet the more it is brought up the more concerned I get about the future. Right now we have enough Republicans to stop it in its tracks and a President that would veto it. Yet, God forbid we end up with a Democrat president and enough Democrat congressmen this could actually become law sometime in the future if we don't speak up.

The bottom line is NO ONE wants to listen to liberal talk radio. Liberals have tried repeatedly and failed. Dennis Miller gives an excellent reason on why liberal talk radio fails, go here to listen to him. He points out that it isn't Conservative vs. Liberal but optimism vs. pessimism and I couldn't agree more. Most liberals are glass half-empty people and the American people don't want to hear ranting from doom and gloomers. This is why I despise Michael Savage and he is in the minority of Conservative talk show hosts. He is extremely negative and offers no positive solutions, no one but angry people want to listen to that.

To read the rest of my thoughts on the subject, including how talk radio listeners are more informed, go here.
Posted by Dionne at 1:43 PM