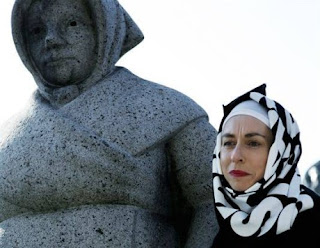 It seems like nothing of great import has been happening in Denmark lately - at least the kind of headline grabbing event the news industry craves.

While I have not contributed here in quite some time I doubt anyone has missed my contribution to the information-heap.

Then again - there have been some important tidal shifts occurring in the political scene here which may interest some of you.

Perhaps you might recall that the Swedish Social Democratic Government was defeated at the polls by a new coalition called the Alliance Party. Something similar may be developing here in Denmark. Two members of the Radical Party,Naser Khader and Anders Samuelsen - (The Radical is a liberal party which broke from the farmers Left party about 100 years ago and was for many years the party that tipped the paliamentary scales...) and one member of the Conservative Party, Gitte Seeberg - have formed New Alliance Party.
The birth of this party is a result of years of frustration with for example the tax-stop which essentially froze fiscal policy, and the controversies surrounding the sitting Governments support party - the right wing Dansk Folkeparty (danish peoples party). And whether or not one supports the New Alliance the general consensus is that it is positive for democracy that they will challenge what has otherwise become a stalemate.
While the political deadlock has slowly been calcifying - the catalyst to the emergence of this new party has been a central issue in Danish politics: immigration and Islam. Members of the Danish Folkparty protested the possibility that a potential member of parliament could speak in parliament while wearing a head-covering. One even compared the Islamic Women's head-covering with the Nazi's Swastika - and the Koran with Mein Kampf. One of Khader's colleagues in the Radical wore a headdress to defend the right of women to wear head-covering - she is shown above standing next to a statue of a traditional fishmonger...Khader claimed that this was the straw that borke the camel's back - as a moderate muslim the defense of the head-covering by his colleague was too much. (afterwards there was much hullaballoo about the veracity of Khader's claim).

Personally I find the comparison of the muslim women's headgear to a Swastika offensive - I believe the comparison to a yellow Star of David more apt.

Women should be free to choose their attire - not be forced to wear it. I believe the extreme right wingers speak with a kernel of truth when they alarm us to the dangers of Islamic Fundamentalists - but their statements are easily interpreted as racist.

After the summer we will see if the New Alliance Party has a positive influence on Danish Politics. Meanwhile I look forward to a real NEW ALLIANCE which will work to guarantee the rights of women oppressed by Islamic and Tribal traditions.
Posted by northern seer at 5:33 AM