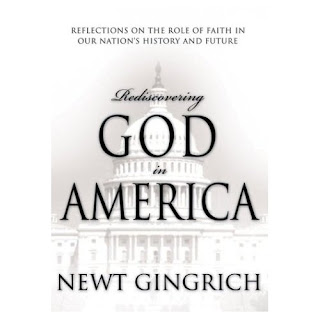 In weighing my options for who I will support for the Republican nomination in 2008 many struggles have surfaced. Right now the front runner for my support is Rudy. The problem is since I am an Evangelical, pro-life Christian I know many of my fellow Christians will have a hard time supporting him.

I could care less who Falwell or Robertson endorse but the big question for me is who will James Dobson support? He has already made it clear that he won't support McCain for which I was immensely pleased but reality dictates that he probably won't endorse Rudy either. I see him having some difficulties with Romney so who does that leave?

Thus, I found it intriguing that Newt Gingrich's recent book, Rediscovering God in America has enabled him to make an appearance on Dobson's radio show yesterday and today. I like Newt so I'm pretty happy about this. After Rudy my 2nd and 3rd picks are Duncan Hunter and Newt Gingrich. Many people argue that Newt doesn't have a prayer and at one time I would've agreed with them but I see the winds changing. I don't know how much of a chance he has but he does have a shot.

To listen to Dobson's interview with Newt from yesterday go here.
Posted by Dionne at 10:27 PM

I would like to invite you to visit Http://www.draftnewt.org
We are a national grassroots draft organization that is gathering the peoples support for a Gingrich White House bid.
I hope you enjoy our site and if you wish to get involved don’t hesitate to sign up!

I love Newt!
Many people are afraid of Newt being toxic because of his days as Speaker of the House - but because the liberals were always throwing mud at him. Because Newt was always kicking their butt's.
Granted Newt did have some marriage problems.
I like how Newt is playing this - under the radar and planning on when he will announce.