He Should Have Said he is a Muslim 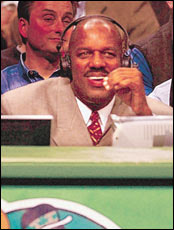 "Celtics radio analyst Cedric Maxwell apologized on the air last night for saying that a female referee should "go back to the kitchen" after he disagreed with one of her calls.

Maxwell made the comment during the Celtics' 77-72 victory over the Rockets on Monday. He subsequently said, "Go in there and make me some bacon and eggs, would you?" in reference to referee Violet Palmer.

I doubt that "back to the kitchen" implies female inferiority. I myself am greatly respectful of good cooks. I often drive for miles in pursuit of a good dinner.

But if we take it as given that the commentator was disrespecting women (and men and women OFTEN say disrespectful things about the opposite sex) then he should have said that he was a Muslim -- because female inferiority is part of Islamic doctrine and, as we know from experience, Islam is especially protected by the First Amendment. Christian utterances certainly are not -- as I noted on on 6th, for instance.

Anyway, what is wrong with men and women being good at different things? They always have been and always will be. And why must people not say so? Has reality been outlawed? Mentioning a lot of it certainly seems to have been.

(For more postings from me, see TONGUE-TIED, POLITICAL CORRECTNESS WATCH, DISSECTING LEFTISM. My Home Page. Email me (John Ray) here.)
Posted by JR at 7:46 AM