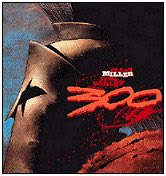 Will the 3000 brave American heroes who have given their lives for the cause of liberty and democracy and global security from jihado-fascism go down in history as the Spartan 300?

Maybe - if the Left has it's way, and if they succeed in pulling the plug on US military aid to the democratic republic of Iraq. Here's what the 300 did:

In the Battle of Thermopylae of 480 BC, an alliance of Greek city-states fought the invading Persian army at the pass of Thermopylae in central Greece.

Vastly outnumbered, the Greeks held back the enemy in one of the most famous last stands of history. A small force led by King Leonidas of Sparta blocked the only road through which the massive army of Xerxes I could pass.

After three days of battle a local resident named Ephialtes betrayed the Greeks, revealing a mountain path that led behind the Greek lines.

Dismissing the rest of the army, King Leonidas stayed behind with 300 Spartans and 700 Thespian volunteers.

Though they knew it meant their own deaths, they held their position and secured the retreat of the other Greek forces.

The Persians succeeded in taking the pass but sustained heavy losses, extremely disproportionate to those of the Greeks.

The fierce resistance of the Spartan-led army offered Athens the invaluable time to prepare for a naval battle that would come to determine the outcome of the war. Subsequent Greek victory in the Battle of Salamis left much of the Persian navy destroyed. Xerxes was forced to flee to Asia and left his army in Greece under Mardonius, who was to meet the Greeks in battle for one last time. The Spartans and other Greek allies assembled at full strength and decisively defeated the Persians in the Battle of Plataea, putting thus an end to the Greco-Persian War, along with Persian expansion into Europe.

The performance of the defenders at the battle of Thermopylae is often used as an example of the advantages of training, equipment and good use of terrain to maximise an army's potential, as well as a symbol of courage against overwhelming odds. The heroic sacrifice of the Spartans and the Thespians has captured the minds of many throughout the ages and have given birth to many cultural references as a result.

The 300 were betrayed by one of their own, just like the Left - (in the Congress and in the MSM) - is betraying US and the Iraqis struggling to defend their nascent democracy to the jihadofascists.
TRAILER HERE. And HERE. Check out this NPR interview with Frank Miller - author of the script of the upcoming movie.
Posted by Reliapundit at 12:23 AM

There's an excellent book about the Battle of Thermopylae, Gates of Fire. The author is Stephen Pressfield. If you haven't read it, you should.