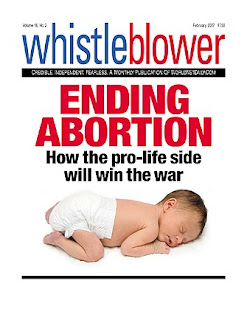 Why are pro-lifers smiling?


* "Unless drastic changes are made, American women will lose the right to abortion and the [U.S.] Supreme Court won’t be the cause of it ... the reason will be that physicians either can't or won't perform this essential service." – Barbara Radford, former director, National Abortion Federation

* "... the availability of abortions is diminishing because fewer doctors are willing to perform the procedure." – The Washington Post

* "Those who run abortion clinics, even in large cities, say that recruiting doctors is now their most serious problem." – The San Francisco Chronicle

* "Abortion is a matter of choice in this country not only for women but for physicians as well. All over the country, most physicians are choosing not to do it …" – American Medical News

We don't often get good news when it comes to the pro-life issue so I found this extremely encouraging. It is nice to know that those of us who value life are having some victories in the culture war.
Posted by Dionne at 2:09 AM

My thought ran "there is no joy in Mudville..."

I've sisters. I grew up in the '60's. While I don't agree with the argument of "Roe", I don't want a return of the murder days.

I've always wanted a private response and alternative to back-room abortion. Between a doctor, a father and mother, a daughter and her priest/minister.

I've never wanted to be an absolutist in this case. But I know I've never wanted to lose a sister because I was "right". It's not discouraging to know that some women want/need to terminate a pregnancy/life. It's absolutely horrible. Without question. But move forward. The only absolute you have in your life is that you're alive. And that you will die.

When you're sixteen...you'll make bad decisions again. Are you good enough within yourself to know that condemning the choices of a sixteen year old will take you to heaven? What grace has been given to you that I don't know about?

Abortion is not just a sin...but a break in the commandments. Letting government make the case for or against isn't right. Because it's not just a case of law. Sometimes life is just a nasty mess and we muddle through.

Where we are today is wrong. 3rd trimester abortions...

but, there are women--girls--who really don't understand their bodies. You and I know that there are more than enough private (non-governmental) resources to help these under-educated (ignorant) mothers-to-be. With love for both mother and child.

So, if you're an absolutist...having no doctors willing to council a young girl may be a place you want your neighborhood, or your family, to end up. If you were a doctor, you'd have to care for your patient.

i believe that science can moot the issue one day - and have blogged on it several times.

the problem is that when a woman wants to end a pregnancy she NOW has to kill the baby.

what if she could end it before term without killing the baby?

by extracting the embryo/fetus soon enough, so that if could be used for reimplantation in a woman who can't otherwise have a baby, or frozen for later reimplantation.

how bout of the pro-choice and pro-life crowds could get together woith the govt and fund resesarch tio make this possible and then to make it available along with adoption for this women who CAN go to term but who don't want the baby?

i think this is a win-win-win: one woman gets to end an unwanted pregnancy another gets to have a pregnancy she might not otherwise have, AND THE BAY LIVES!

and the political fight is mooted. stops.

i have posted on this in greater detail. google abortion here at TAB and you will find a few of them.