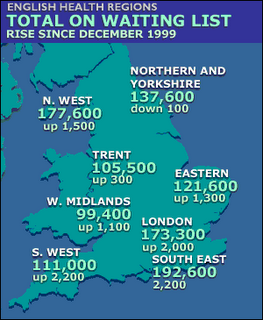 BRITISH doctors [said] he was too old to be treated on the National Health Service. But, at 72, he flew to Asia for a double-lung transplant and now claims to be the oldest man in Britain to have survived the operation. Joseph — not his real name — is one of a growing number of Britons who, frustrated with NHS waiting lists, are venturing into the murky world of organ brokers offering kidneys and livers harvested from the poorest quarters of the world, sometimes illicitly. ... He remains unsure where his new lungs came from. The Singapore surgeons told him only that they had been donated by the family of a much younger man who died from an unspecified head trauma.

Obama and Hillary want to nationalize healthcare in the USA. We should be very VERY worried.

DES MOINES, Iowa - Sen. Hillary Rodham Clinton opened her quest for the White House Saturday stressing her potentially historic role as a woman - a tough woman at that, who will "deck" opponents, win the presidency and enact universal health care that eluded her as First Lady.

Lefties like Obama and Hillary will destroy this nation if we let them...

UPDATE#2: "MORE than half of people surveyed in Wales would turn to therapists such as faith healers rather than endure long NHS waiting lists, according to a poll out today."

If you put your faith in socialism then you might as well put your faith in faith-healers. [BTW: the graphic is from a BBC article posted in 2000 - and things have gotten WORSE since then! Does America really want to go that route!?!]
Posted by Reliapundit at 8:57 PM