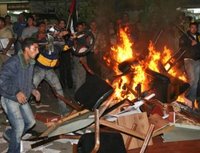 Speaking at a joint press conference with U.S. Secretary of State Condoleezza Rice, Abbas said any new Palestinian government had to honor signed agreements with Israel. ... The Palestinians had hoped that the formation of a unity government would ease the crippling aid embargo.

Abbas said earlier in the day that a new cabinet had to be formed to end the recent surge in violence that erupted after coalition talks collapsed and which has claimed more than 10 lives in three days. ... Interfactional violence continued throughout the West Bank and the Gaza Strip yesterday for the third consecutive day since unity government talks broke down.

Abbas also said at his presser with Rice that he wanted to get the "Peace process" going again. Sheesh.

When people talk of "The Palestinian Peace Process" now they can only TRULY mean talks between Hamas and Fatah - two terrorist groups. IF PALESTINIANS TRULY WANTED PEACE, THEN THEY WOULD STOP KILLING EACH OTHER. Instead, they are nearly as brutal to each other as Sunnis and Shias are to each other. IS THERE A PATTERN HERE!? YES: Muslim extremists are unreasonable violent and untrustworthy. They are not the type of people Israelis can make any deal with. Until Palestinians CHOOSE to become reasonable and non-violent, Israel has no choice but to build a wall and keep the Palistanis on the freakin' other side of it.

ADDENDUM: You know things are really bad in Palistan when HUMAN RIGHTS WATCH calls them out on their violence!

MORE ON PALI'S BLAMING OTHERS FOR THEIR OWN "SADO-MASOCHISTIC JIHADISM" HERE. (Sado-masochistic jihadism is so much more accurate than "inter-factional violence.")
Posted by Reliapundit at 8:23 PM