OBAMA HAS UTTERLY FAILED TO MEET THE STANDARD HE SET IN HIS PHILADELPHIA SPEECH, "A MORE PERFECT UNION" 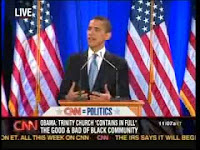 
For the men and women of Reverend Wright's generation, the memories of humiliation and doubt and fear have not gone away; nor has the anger and the bitterness of those years. That anger may not get expressed in public, in front of white co-workers or white friends. But it does find voice in the barbershop or the beauty shop or around the kitchen table. At times, that anger is exploited by politicians, to gin up votes along racial lines, or to make up for a politician's own failings.

... For we have a choice in this country. We can accept a politics that breeds division and conflict and cynicism. We can tackle race only as spectacle — as we did in the O.J. trial — or in the wake of tragedy — as we did in the aftermath of Katrina — or as fodder for the nightly news. We can play Reverend Wright's sermons on every channel, every day and talk about them from now until the election, and make the only question in this campaign whether or not the American people think that I somehow believe or sympathize with his most offensive words. We can pounce on some gaffe by a Hillary supporter as evidence that she's playing the race card, or we can speculate on whether white men will all flock to John McCain in the general election regardless of his policies.

IN 2012, OBAMA IS EMPLOYING THE VERY SAME POLITICS OF DIVISION HE CONDEMNED IN 2008:
SICKENING. 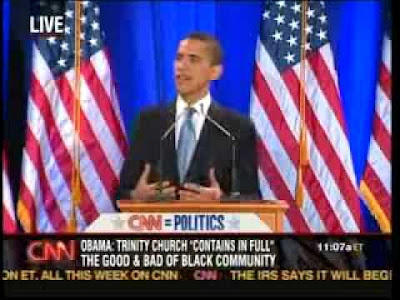 ONLY AN IMMORAL EGOMANIAC WOULD DO WHAT HE'S DOING.

[ASIDE: THAT'S THE SPEECH THAT EARNED CHRISSIE MATTHEWS THE NICKNAME "TINGLES".]
Posted by Reliapundit at 6:55 PM