NSFW PHOTOS: THE RUNNING OF THE BOOBS, ER UM I MEAN BULLS

SAN FERMIN'S RUNNING OF THE BULLS HAS APPARENTLY BECOME ANOTHER ALCOHOL AND DRUG INFUSED MARDI GRAS. 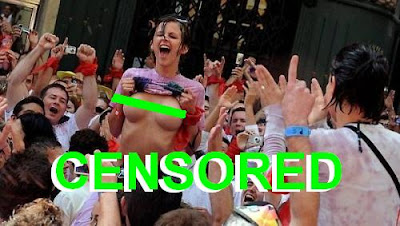 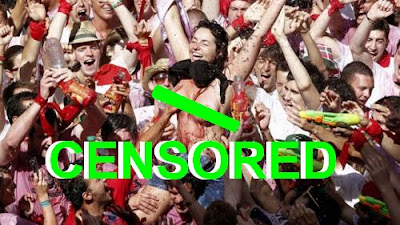 WHAT WOULD HEMINGWAY THINK? AFTER ALL, MANY PEOPLE GO TO SAN FERMIN BECAUSE OF HIM:

There are homages to Hemingway throughout Pamplona.

A bust of the writer crowns the entrance to the bullring and to the Iruna cafe where his regular spot is "Hemingway's corner".

His words still draw generations of young Americans, Britons, Australians, New Zealanders and Canadians to this capital of Navarre.

American Jim Rhodin, 71, is on his 21st visit. "He put Pamplona on the map with his books. I have read all his books," said the Atlanta-born tourist who has a passing likeness to Hemingway.

"Most of us, especially the English speakers, are here because of Hemingway. San Fermin would not be that big if it was not for Hemingway," said 58-year-old fellow American Robert Mykle, who organises a mini San Fermin festival in Florida every year with his association, "Los amigos de Pamplona" (Friends of Pamplona).

Larry Mazlack, a Canadian sitting an outside table near the Perla, wearing a cap and a white beard, has come every year since 1976.

He has ready every Hemingway book, too.

But it was not Hemingway who convinced him to come.

Much of the worldwide fame of the Sanfermines is due to the references made by Ernest Hemingway in his articles as a reporter and in his novel "The Sun Also Rises", known as "Fiesta" in the Spanish-speaking world.

The future Nobel Prize winner first visited Pamplona on July 6th 1923, accompanied by his wife, Hadley Richardson. The Sanfermines made such an impression on him that he returned on several occasions, the last in 1959. During his visits to Pamplona he usually stayed at the Hotel La Perla in the Plaza del Castillo.

In those years it was quite common to see him on the cafe terraces of the Plaza del Castillo, running the bulls or avoiding the young bulls in the bull ring.

MORE NSFW PHOTOS AT THE LINK.

UPDATE: VIDEO OF A STREAKER GETTING GORED HERE!

Posted by Reliapundit at 7:54 PM

This event was once part of a religious festival, commemorating the martyrdom of a saint. Now it seems like more of a bacchanal. Although according to the Wikipedia, excessive drinking during the festival was noted from the 17th century.