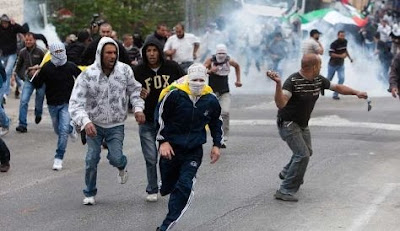 Clashes break out in capital; 34 arrested as stones, Molotov cocktails thrown at security forces; up to 11 Palestinians injured in clashes.

Four police officers and up to 11 Palestinians were injured in protests and disturbances that took place throughout east Jerusalem on Friday ahead of large demonstrations expected on Sunday to mark " Nakba Day." A 17-year-old Palestinian was reported to be in serious condition after being shot in his shoulder, Israel Radio reported, citing the Red Crescent.

Thirty-four people were arrested for disturbing the peace and intending to use Molotov cocktails, police said.

THIS IS NOT SPONTANEOUS VIOLENCE.

THIS IS PLANNED AND COORDINATED - INTERNATIONALLY IN A COALITION OF JIHADISTS, ANTI-ZIONISTS AND LEFTISTS - LIKE THE LAST FLOTILLA.

I PREDICT THAT IT'S GONG TO GET WORSE EVERYDAY BETWEEN NOW AND THE NEXT FLOTILLA IN JUNE.

ESPECIALLY ON SO-CALLED NABKA DAY - 5/15 AND AFTER OBAMA'S 5/22 SPEECH AND PROBABLY DURING BIBI'S 5/25 ADDRESS TO THE HOUSE.

BTW: I BETCHYA THERE WILL BE MORE CALLS FOR ISRAEL TO REFRAIN FROM COUNTER-ATTACKING THAN THERE HAVE BEEN CALLS FOR ASSAD TO STOP.

THEY MAY EVEN COME FROM OBAMA - WHO, AS A COMMITTED LEFTIST, REALLY BELIEVES THAT ISRAEL IS THE IMPEDIMENT TO PEACE.

PREVIOUS POSTS ON THE THIRD INTIFADA HERE AND HERE.

UPDATE: THE ARABS AND LEFTISTS ADMIT THEIR ATTEMPT TO START A 3RD INTIFADA IS UNDERWAY - HERE AND HERE.

Palestinians attend funeral of Milad Said Ayyash, 17, who died of wounds sustained in Friday protests near Silwan; police arrest Palestinians attempting to break into settler's house near the site of his shooting.

REMINDER THAT THERE IS PROOF THAT THIS IS A COORDINATED INTERNATIONAL WAR ON ISRAEL - ONE WAGED BY MUSLIM NATIONS, THE E.U. AND INTERNATIONAL LEFTIST GROUPS:

FROM JANUARY THIS YEAR:

IHH, left-wing European groups plan to send flotilla this May, one year after another IHH flotilla resulted in bloodshed that prompted widespread international condemnation of Israel.

Israel will launch a public campaign on Tuesday [BACK IN JANUARY!] against a plan by the Turkish organization IHH and several left-wing European groups to send a flotilla to the Gaza Strip this May, a year after another IHH flotilla resulted in bloodshed that prompted widespread international condemnation of Israel.

IHH activists aboard that flotilla attacked Israeli soldiers who tried to intercept it with axes, knives and iron bars. Nine Turks were killed.

Deputy Foreign Minister Danny Ayalon will summon foreign ambassadors to the ministry today to seek their help in stopping this year's flotilla, which is slated to contain at least 15 ships. The sailing date has not yet been finalized, but the ministry expects it to be sometime between May 15, when the Palestinians commemorate the "Nakba" ("catastrophe" ) of Israel's establishment, and May 31, the anniversary of last year's deadly interception.

NOTE: EZEKIEL IS SOUNDING MORE AND MORE ACCURATE THESE DAYS...

There is a Facebook page of the same name promoting the event.