THE MISERY INDEX IS INFLATION + UNEMPLOYMENT.

What Is The Actual Unemployment Rate?

When we look at the unemployment figures that the government puts out we get two figures. First, we get the standard jobless rate, which only looks at people who have reported looking for work in the past 4 weeks. Then, we get the real (U6) rate, which also takes into account the number folks who are either underemployed or have stopped looking for work because they can’t seem to find anything. From MSN:

The official unemployment index, based on a monthly survey of sample households, counts only people who reported looking for work in the past four weeks. It doesn’t account for part-time workers who want to work more hours but can’t, given the tight job market. And it doesn’t include those who have given up trying to find work.

When the underemployed and the discouraged are added to the numbers, the unemployment rate rises to 16.6%. The Bureau of Labor Statistics, a unit of the Labor Department, began tracking this alternative measure — known as the U-6 for its department classification — in 1995 after economists lobbied for a method comparable to the way Japan, Canada and Western Europe count their unemployed.

A LITTLE LESS ACCORDING TO THE BLS: 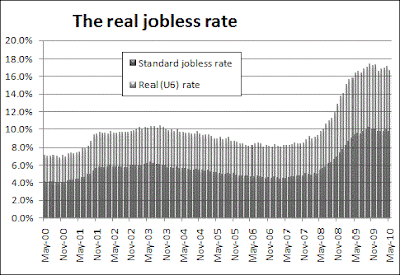 WHAT IS THE REAL INFLATION RATE?: Inflation Actually Near 10% Using Older Measure

After former Federal Reserve Chairman Paul Volcker was appointed in 1979, the consumer price index surged into the double digits, causing the now revered Fed Chief to double the benchmark interest rate in order to break the back of inflation. Using the methodology in place at that time puts the CPI back near those levels.

Inflation, using the reporting methodologies in place before 1980, hit an annual rate of 9.6 percent in February, according to the Shadow Government Statistics newsletter.

Since 1980, the Bureau of Labor Statistics has changed the way it calculates the CPI in order to account for the substitution of products, improvements in quality (i.e. iPad 2 costing the same as original iPad) and other things. Backing out more methods implemented in 1990 by the BLS still puts inflation at a 5.5 percent rate and getting worse, according to the calculations by the newsletter’s web site, Shadowstats.com.

“Near-term circumstances generally have continued to deteriorate,” said John Williams, creator of the site, in a new note out Tuesday.

ER UM... THAT'S WAY WAY BEYOND CARTER TERRITORY AND HIS HAD BEEN THE WORST SINCE WW2:

OBAMA IS THE WORST POTUS EVER.

I HOPE AND PRAY WE SURVIVE UNTIL NOVEMBER 2012 AND VOTE THIS AWFUL MAN OUT OF OFFICE.

UNTIL THEN, THE HOUSE GOP IS ALL WE GOT!

Posted by Reliapundit at 6:25 PM