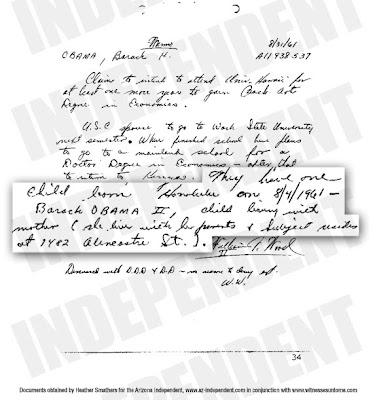 Radio Patriot seems to agree with me: Barack Senior is not the biological father of our current one-term president:

Wanna know what I think?

I’m thinking that a mutually beneficial deal was struck between Stanley Ann’s parents (her father, principally) and Obama Sr. — a quid pro quo, if you will. Ann needed cover for the mixed race baby in her belly, and the dark-skinned Obama Sr. needed an alibi – an American wife to enable him to remain in the USA. He gave her his name, she gave him his green card. Voila! Fait accompli! He went his way, she went hers.

Later, she constructed a fantasy story about a prince of a father for her otherwise bastard son that no one could refute, or so she thought…

I THINK RADIO PATRIOT IS CORRECT - BARACK SENIOR IS NOT THE BIOLOGICAL FATHER OF OUR CURRENT POTUS.

I BELIEVE THE FATHER WAS FRANK MARSHALL DAVIS - WHO OPENED UP ALL THE DOORS FOR OBAMA VIA HIS CONNECTIONS TO THE CHICAGO MACHINE, AND TOM AYERS AND THE ELITISTS OF CHICAGO'S LEFT.

FOR THE SCENARIO AND ALL ITS MANY FACETS AND LINKS GO HERE.

Posted by Reliapundit at 9:33 PM

On the money! Just look at the pictures of Davis, Obama, Sr., and Obama, Jr. Obama, Sr. didn't sign the "birth certificate."

No, it is quite obvious to me that BHO looks more like Davis than any way he looks like Sr. I never thought he looked like the Sr. Obama, and now I understand it...I am a portrait artist and a facial profiler and look seriously at faces and patterns.