MOHAMED: PISS BE UPON HIM - (UPDATED) 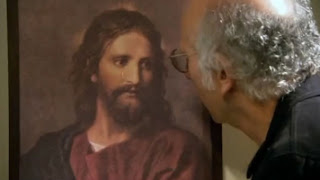 COMMENTER AT NEVER YET MELTED [LINK BELOW ADDED]:

Exactly! I think the answer to the whole dilemma is to get Larry David to urinate on the Koran, or better yet a picture of the Prophet Mohammed, peace be upon him, no pun intended, like he urinated on a picture of Jesus on his show Curb your Enthusiasm.

Mr. David being a courageous member of the avant-garde leftist intelligentsia I am sure he will be glad to oblige, and if he is afraid of being beheaded then any famous leftist celebrity is sure to step up in honor of freedom of speech and puncturing religious fascism.

Come on Clooney, Garafalo, Robbins, Sarandon, Stone, Penn, etc. etc., step right up and take a stand! (Or squat in the case of Garafalo and Sarandon). Let’s see your true colors!

PISS BE UPON HIM!

HERE'S WHAT OUR FOUNDERS THOUGHT OF ISLAM --- (VIA DOUG ROSS):

Correspondence from John Adams to Thomas Jefferson on July 16, 1814, reveals John Adams’ true feelings about Islam: Adams states that Mohammed is “a military fanatic” who “denies that laws were made for him; he arrogates everything to himself by force of arms.”

John Adams did indeed own a Quran — the copy he owned contained the following in the preface:

This book is a long conference of God, the angels, and Mahomet, which that false prophet very grossly invented; sometimes he introduceth God, who speaketh to him, and teacheth him his law, then an angel, among the prophets, and frequently maketh God to speak in the plural. … Thou wilt wonder that such absurdities have infected the best part of the world, and wilt avouch, that the knowledge of what is contained in this book, will render that law contemptible …

Here is what John Quincy Adams wrote about the Islamic prophet Mohammed:

In the seventh century of the Christian era, a wandering Arab of the lineage of Hagar, the Egyptian, combining the powers of transcendent genius, with the preternatural energy of a fanatic, and the fraudulent spirit of an impostor, proclaimed himself as a messenger from Heaven, and spread desolation and delusion over an extensive portion of the earth. Adopting from the sublime conception of the Mosaic law, the doctrine of one omnipotent God; he connected indissolubly with it, the audacious falsehood, that he was himself his prophet and apostle. Adopting from the new Revelation of Jesus, the faith and hope of immortal life, and of future retribution, he humbled it to the dust, by adapting all the rewards and sanctions of his religion to the gratification of the sexual passion. He poisoned the sources of human felicity at the fountain, by degrading the condition of the female sex, and the allowance of polygamy; and he declared undistinguishing and exterminating war, as a part of his religion, against all the rest of mankind. THE ESSENCE OF HIS DOCTRINE WAS VIOLENCE AND LUST: TO EXALT THE BRUTAL OVER THE SPIRITUAL PART OF HUMAN NATURE. [emphasis in the original]

John Quincy Adams also described the Quran in one of his essays as follows:

The precept of the koran is, perpetual war against all who deny, that Mahomet is the prophet of God. The vanquished may purchase their lives, by the payment of tribute; the victorious may be appeased by a false and delusive promise of peace; and the faithful follower of the prophet, may submit to the imperious necessities of defeat: but the command to propagate the Moslem creed by the sword is always obligatory, when it can be made effective. The commands of the prophet may be performed alike, by fraud, or by force.

In a March 23, 1790, letter to the editor of the Federal Gazette, Ben Franklin wrote:

Nor can the Plundering of Infidels be in that sacred Book [the Quran] forbidden, since it is well known from it, that God has given the World, and all that it contains, to his faithful Mussulmen, who are to enjoy it of Right as fast as they conquer it.

Thomas Jefferson? Like John Adams, he did own a Quran, one translated by George Sale. Here are some of Sale’s comments on the Quran, included by Sale in his introduction:

It is certainly one of the most convincing proofs that Mohammedism was no other than human invention, that it owed its progress and establishment almost entirely to the sword.

During the Barbary Wars, in 1805, the bey (i.e., monarch) of Tunis threatened war with the United States after the U.S. had been successful in capturing some Tunisian pirate ships. The bey sent an envoy to the United States to negotiate for the return of the ships. This envoy stayed in Washington for six months, during which the month of Ramadan passed.

One of Thomas Jefferson’s many invitations extended to this envoy to meet with him at the White House was during the month of Ramadan. To accommodate the envoy’s religious obligation, Jefferson changed the time of dinner from the usual “half after three” to “precisely at sunset.”

Jefferson was being polite — not celebrating the first White House iftaar, as Akbar Ahmed suggests.

The first Ramadan iftaar was not actually held at the White House until 1996.

Indeed, in a letter dated June 26, 1822, Jefferson had this to say about Islam in a passage regarding Calvinism:

Verily I say these are the false shepherds foretold as to enter not by the door into the sheepfold, but to climb up some other way. They are mere usurpers of the Christian name, teaching a counter-religion made up of the deliria of crazy imaginations, as foreign from Christianity as is that of Mahomet.

MORE AT THE LINK!

Thanks for the info - very important!