In fact, by virtually any objective measure of human well-being — e.g., life expectancy; infant, child and maternal mortality; prevalence of hunger and malnutrition; child labor; job opportunities for women; educational attainment; income — humanity is far better off today that it was before the start of industrialization.

That human well-being has advanced with economic development is clearly true for industrialized countries. The figure below for the U.S., a surrogate for industrialized countries, shows that life expectancy — perhaps the single most important indicator of human well-being — and GDP per capita — the best single measure for material well-being — increased through the 20th century, even as CO2 emissions, population, and material, metals, and organic chemical use increased. 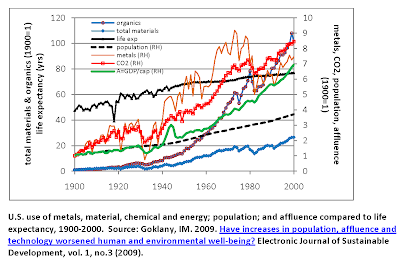 ... Following is a sampling of fossil fuel dependent technologies that have helped advance specific facets of human well-being:

In addition, a substantial share of the income of many developing countries comes directly or indirectly from trade, tourism, developmental aid (to the tune of at least $2.3 trillion over the decades), and remittances ($328 billion in 2008 alone) from industrialized countries. Much of this would have been impossible but for the wealth generated in industrialized countries by fossil fuel powered economic development. This economic development also allowed the US (and other developed countries) to offer humanitarian aid to developing countries in times of famine, drought, earthquakes, floods, cyclones, tsunamis and other disasters. Moreover, such aid would have been virtually impossible to deliver in large quantities or in a timely fashion absent fossil fuel fired transportation. Similarly, it would be impossible to sustain the amount of trade and tourism that occurs today without fossil fuels.

Clearly, fossil fuels have advanced human well-being in both industrialized and developing countries. The claim that the net effect of fossil fuels has been detrimental to either group is unsubstantiated.

WHAT THE THIRD WORLD NEEDS IS INDUSTRIALIZATION AND FREE MARKETS AND FREE TRADE - NOT HANDOUTS OR CARBON SWAPS.

THE PEOPLE WHO RETARD THE INDUSTRIALIZATION OF THE THIRD WORLD ARE THE LEADING CAUSE OF THIRD WORLD POVERTY AND MALNUTRITION AND SHORTER LIVE SPANS.

WHO ARE THESE PEOPLE? ARE THEY BIG CORPORATIONS? GREEDY CAPITALISTS? UNSCRUPULOUS CONSERVATIVES?

NO, THEY'RE LIBERALS. LIBERALS WHO ADVOCATE THINGS LIKE PROTECTIONISM, SUSTAINABLE DEVELOPMENT AND THE GREEN ECONOMY.

TO MAKE THIRD WORLD POVERTY HISTORY WE NEED TO MAKE THE LEFT HISTORY.
Posted by Reliapundit at 9:29 PM