Obama: a president who would rather redistribute income than create wealth

Dick Morris does some numbers:

President Obama’s will become notable for his War on Prosperity. We’re speaking, of course, of Obama’s plans to hike income taxes on the most wealthy 2 or 3 percent of the nation. He’s not just raising the top rate to 39.6 percent; he’s also disallowing about one-third of top earner’s deductions, whether for state and local taxes, charitable contributions or mortgage interest. This is an effective hike in their taxes by an average of about 20 percent.

And soon the next shoe will drop — he’ll announce that he’s keeping yet another of his campaign promises: to apply the full payroll tax to all income over $250,000 a year. (Right now, the 15.3 percent Social Security tax only applies to the first $106,800 of income — you neither pay the tax on income above that, nor accumulate added benefit.) For many taxpayers in this bracket, this hike will raise their total taxes by about half. Finally, he’s declaring war on investors by raising the capital-gains-tax rate to 20 percent.

These increases are politically insignificant: The top 2 percent of the nation casts only about 4 percent of the votes, barely enough to attract the notice of even the most meticulous pollsters. But they have enormous economic significance. Those who earn more than $200,000 pay almost 60 percent of America’s income taxes and account for a third of its total disposable income…

Here is a president who would rather redistribute income than create wealth. He thinks it more important to grow government than to fight inflation…. We have a president, in short, who will stand on his principles. Unfortunately, they’re bad ones. 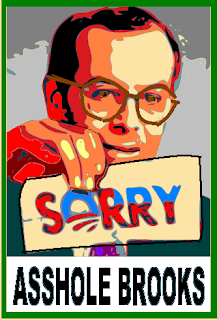 Clever commentators who fancy themselves conservative and use big words like epistemological are having second thoughts about the second coming. ‘Bout time.

OBAMA IS ALREADY THE WORST PRESDIENT OF ALL TIME.
Posted by Reliapundit at 9:30 PM

Great article, as usual by Yoda himself, Dick Morris, the master...

As for David Brooks who rakes in 300k a year from the Grey Lady to assault fellow Republicans, he has NO credibility whatsoever.

Especially in the manner he went after Gov Palin...