ARE FORECLOSURE RATES REALLY CATASTROPHIC AND GETTING WORSE? NO.

THINGS ARE NOT AS BAD AS THEY WANT YOU TO BELIEVE - AND : THEY ARE GETTING BETTER:

Completed foreclosures in California dropped 31.5 percent from December to January, according to a Wednesday report from Foreclosures.com.

California in September adopted Senate Bill 1137, which imposed new requirements on lenders to make contact with homeowners prior to filing for foreclosure. Alexis McGee, president of Foreclosures.com, says such regulatory moves are behind the drastic drop in foreclosures.

“Efforts last year by government and industry to lay the groundwork for housing recovery finally are yielding the hoped-for slowdown in the foreclosure hemorrhage,” McGee said in a news release. “The nation’s foreclosure crisis largely began in California. The comeback is spreading from there as well. It’s not quite time to pop that celebratory champagne. But Fannie Mae and Freddie Mac’s moratorium on foreclosures before the holidays, big lenders emphasizing loan workouts, and states taking steps to slow down foreclosures are all are working together to make a difference. And the significant drops have occurred despite the higher 7.6 percent unemployment rate.”

Georgia’s foreclosure activity slowed down in January, but the state is still in the top 10 for foreclosure rates, according to RealtyTrac’s January 2009 U.S. Foreclosure Market Report published Thursday.

Florida foreclosures were down nearly 22 percent in January, to 10,007 from 12,786 in December. That mirrors a nationwide trend, according to the latest U.S. Foreclosure Index report from Sacramento, Calif.-based Foreclosures.com.

It's unclear whether this is a trend reversal, or just a blip in a continuing slide.

“Efforts last year by government and industry to lay the groundwork for housing recovery finally are yielding the hoped-for slowdown in the foreclosure hemorrhage,” Foreclosures.com President Alexis McGee said.

Nationwide, she reported, foreclosures were down 25 percent, to 72,694 in January from 97,841 in December. That’s the lowest number of completed foreclosures since April 2008. Only Texas and Michigan saw a month-over-month increase in foreclosures.

OR PERHAPS BIGTIME INVESTORS - LIKE SOROS - HAVE A SELF-INTEREST IN DRIVING THE MARKET DOWN?

THEY SELL SHORT ON THE WAY DOWN, AND THEN GET THE FED TO SCOOP UP THE BANK AND CLEAN IT UP (REMOVING THE BAD LOANS), AND THEN THE INVESTOR-VULTURES LIKE SOROS GET TO SCOOP UP THE REMAINS - STEALING IT FROM THE FEDERAL GOVERNMENT AND US TAXPAYERS - FOR A SONG.

A seven-member investor group including billionaire George Soros and Dell Inc. founder Michael Dell have agreed to purchase failed lender IndyMac Bank, one of the largest casualties of the housing bust, for $13.9 billion.

IndyMac, which specialized in loans made with little down payment or proof of assets, was seized by the government in July after a run on the bank as the U.S. housing market collapsed. The Federal Deposit Insurance Corp. said Friday that a holding company led by Steven Mnuchin, co-chief executive of private equity firm Dune Capital Management, agreed to buy IndyMac in a deal reached Wednesday.

The investors have formed a partnership, called IMB Management Holdings LP, that includes Dell's investment firm, MSD Capital. Once the deal closes, the investment group will pour $1.3 billion in new capital into IndyMac and continue to operate the Pasadena, Calif-based bank, the FDIC said.

"We have assembled a group of experienced private investors in financial services to acquire the former IndyMac and operate it under new management with extensive banking experience," Mnuchin said in a statement. "We will inject significant private capital into IndyMac so that it can once again effectively serve its customers and communities."

J. Christopher Flowers, who launched, then dropped, a bid to buy student lender Sallie Mae last year, also is a former Goldman Sachs partner. Paulson & Co. made billions in profits in recent years by betting on the failure of risky home loans. 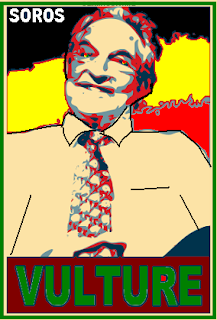 YOU READ THAT RIGHT:

(BY HIS OWN ADMISSION, SOROS IS IMMORAL EVIL ENOUGH TO DO THIS.)

PERHAPS SOROS IS CONTINUING TO TALK THE MARKETS DOWN BECAUSE HE WANTS TO SCOOP EVEN MORE:

Renowned investor George Soros said on Friday the world financial system has effectively disintegrated, adding that there is yet no prospect of a near-term resolution to the crisis.

Soros said the turbulence is actually more severe than during the Great Depression, comparing the current situation to the demise of the Soviet Union.

He said the bankruptcy of Lehman Brothers in September marked a turning point in the functioning of the market system.

"We witnessed the collapse of the financial system," Soros said at a Columbia University dinner. "It was placed on life support, and it's still on life support. There's no sign that we are anywhere near a bottom."

IT IS FUNDAMENTALLY UNFAIR FOR THE LOSSES TO BE SOCIALIZED WHEN THE PROFITS WEREN'T GOING TO BE.

[ASIDE: YES: MANY BANKS ARE IN REAL TROUBLE, BUT IT WASN'T OUR FAULT - SO WE SHOULDN'T BE FORCED TO PAY THE PRICE. IN THE 1933 THERE WAS A TYPICAL BANK RUN - ON DEPOSITS IN BANKS. THAT'S NOT HAPPENING NOW: MUCH OF THE CURRENT BANKING CRISIS IS DUE TO A RUN ON THE BANK STOCKS - AND THIS IS WHAT THE FED AND FTC AND SEC SHOULD BE FOCUSED ON.]

Fairfax County is also using the foreclosure rate to hike the real-estate tax rate. Once hiked, it's well nigh impossible to bring that rate down.

I just found this in the Boston Globe:

At one level, the massive government intervention is aimed only at certain segments of the population....93 percent of homeowners are up-to-date on their mortgages.

The article also mentions the following:

While such interventions aim to benefit everyone by preventing severe damage to the economy, they also risk encouraging irresponsible behavior in the future. Economists call this "moral hazard."

In other words, if homeowners believe the government will lower their payments if they fall behind, they won't have as much incentive to keep paying mortgage bills on time.

The spending on bailouts and stimulus works out to the equivalent of $11,000 for each of the nation's approximately 160 million tax filers.

Thanks a lot, BHO and Dem Congress. [sarcasm]

What do you think of new gov't planA? What I need though is mortgage help now as can't wait to March. This site http://www.needhelppayingbills.com mentioned gov't programs and Hope Now, but it was basic and I need info on the government programs and how to get help. Do you have any info on mortgage help? Thanks