OBAMARXIST: 12 YEARS AGO, OBAMA RAN FOR OFFICE AS AN OUT-AND-OUT MARXIST... 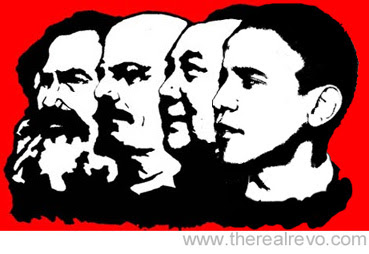 YES: A DOZEN YEARS AGO HE WAS ALREADY A LONGTIME MEMBER OF WRIGHT'S BLACK RACIST CHURCH. DESPITE ALL WE'VE LEARNED, HE'S STILL A MEMBER OF TRINITY.

AND, HE'S STILL A COLLECTIVIST AT HEART.

Barack HUSSEIN Obama's Old party was called the New Party. The party was a Marxist Political coalition. This was not a guilt by association thing. Senator Obama sought out their nomination. He was successful in obtaining that endorsement, and he used a number of New Party volunteers as campaign workers:

Co-founded in 1992 by Daniel Cantor (a former staffer for Jesse Jackson's 1988 presidential campaign) and Joel Rogers (a sociology and law professor at the University of Wisconsin-Madison), the New Party was a Marxist political coalition whose objective was to endorse and elect leftist public officials -- most often Democrats. The New Party's short-term objective was to move the Democratic Party leftward, thereby setting the stage for the eventual rise of new Marxist third party. (edit: As in today's Democratic Party?)

In 1996, three of the four candidates endorsed by the New Party won their electoral primaries. The three victors included Barack Obama (in the 13th State Senate District), Danny Davis (in the 7th Congressional District), and Patricia Martin, who won the race for Judge in the 7th Subcircuit Court. All four candidates attended an April 11, 1996 New Party membership meeting to express their gratitude for the party's support.

... In 1997 the New Party's influence declined precipitously after the U.S. Supreme Court ruled that electoral fusion was not protected by the First Amendment's freedom of association clause. By 1998 the party was essentially defunct. Daniel Canto and other key party members went on to establish a new organization with similar ideals, the Working Families Party of New York

I know PERSONALLY some key people in the Working Families Party - they are Marxist anti-Americans. This is the same crowd who backs ACORN - more here from RICK MORAN. AND HERE TOO.
VOTE ACCORDINGLY.
Posted by Reliapundit at 10:45 PM

Pim Fortuyn was an avowed Marxist and even to the prematurely heinous ending of his life, he did keep a portrait of Marx in his kitchen at his "Palazzo Pietro".

His platforms with both Leefbar Rotterdam and Lijst Pim Fortuyn (LPF) were rather engagingly against the welfare state and that mentality, however, even more shockingly so for a Dutch politician. I offer this merely to say that some enamored with Marx early in life frequently realize the error of their ways (and of the ways of Marxism--as I mention, Pim planned to change much more than merely immigration laws in NL).

Does this mean that Obama is not still partial to Marxism? Hardly. I believe that he is, and it makes me uncomfortable. In the end though, do you think that it will make a difference? John McCain is certainly no villain, but millions will see his Party as such to the point of "voting accordingly", and we now have as the opposition two of the most socialist candidates ever offered to the American public! That is rather alarming.

For all that you delete me RELIAPUNDIT, I'm not posting this comment to be annoying, just because I find this debate interesting; the debate being that voters are between a rock and a hard place, mostly not wanting a Marxist of any sort as Commander in Chief but willing to do anything to get Republicans out of the White House. You raise an important part of this year's debate.

BTW, for more on the Marxist-influenced "theology" that rebuilt Obama's Church, please see the recent NR Print article on James Cone and his influence on Jeremiah Wright. The 2nd issue of May, I'd give the date but only the current issue is here at the moment. That article (an NR cover story) is right up this alley.