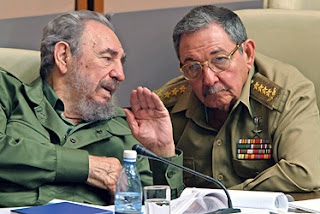 President Bush is planning to issue a stern warning Wednesday that the United States will not accept a political transition in Cuba in which power changes from one Castro brother to another, rather than to the Cuban people. ... 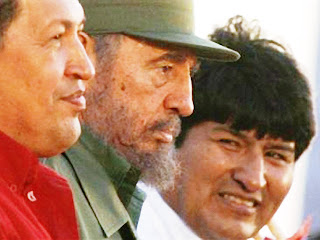 ... In effect, the speech will be a call for Cubans to continue to resist, a particularly strong line coming from an American president.

... The administration official said Mr. Bush was expected to tell Cuban viewers that “soon they will have to make a choice between freedom and the force used by a dying regime.” 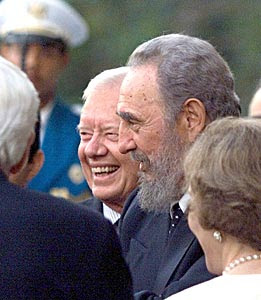 ... The administration official gave no reason for the timing of Mr. Bush’s speech.

MAYBE HE SAYING ALL THIS NOW BECAUSE CASTRO IS FINALLY DYING?

Is GWB planning for the USA to invade Cuba and bring about regime change if Raul doesn't get with the program as GWB has demanded? Isn't the US already a little too busy to take on another war of liberation? Why not open trade with and travel to Cuba - then, the Cuban people will see what Raul and Fidel have denied them (western civilization) and they'll become inspired to tell Raul and his henchmen to take a hike.

BUSH IS WARNING RAUL AND HIS HENCHMEN AND ENCOURAGING THE CUBANS.

THAT'S ALONG WAY FROM WAR.

IF WHEN FIDEL DIES THE PEOPLE RISE UP AND ATTEMPT TO REGAIN THEIR FREEDOM THEN THE USA SHOULD SUPPORT THEM - KINETICALLY IF NECESSARY.

Would you consider a Link Exchange with The Internet Radio Network? At the IRN you can listen for free to over 40 of America's top listened to Talk Shows worldwide via FREE STREAMING AUDIO!