As reported in the New York Sun, credit for the success of the jihadist intifada which began in 2000 goes to . . . the American taxpayer! That's right:

American-run programs that train Fatah militias were instrumental in the "success" of the Palestinian intifada that began in 2000, a senior Fatah militant told The New York Sun.

"I do not think that the operations of the Palestinian resistance would have been so successful and would have killed more than one thousand Israelis since 2000 and defeated the Israelis in Gaza without these [American] trainings," a senior officer of President Abbas's Force 17 Presidential Guard unit, Abu Yousuf, said.

Yes, your tax dollars trained jihadi terrorists who are proud that they succeeded in killing one thousand Israeli civilians -- and the State Department is going to do it again: 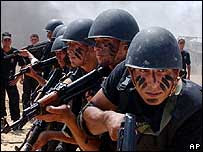 America has longstanding training programs at a base in the West Bank city of Jericho for members of Force 17, which serves as de facto police units in the West Bank, and for another major Fatah security force, the Preventative Security Services.

This weekend diplomatic security officials announced that the State Department will begin training Force 17 again this year in an effort to bolster Mr. Abbas against Hamas, which took over the Gaza Strip in June when the terror group easily defeated American-backed Fatah forces in the territory. [Emphasis added.]

What did President Bush say about those who support terrorists? 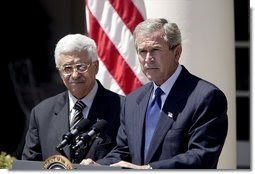 "Any government that chooses to be an ally of terror has chosen to be an enemy of civilization," Bush said. "The civilized world must hold those regimes to account."

"The United States makes no distinction between those who commit acts of terror and those who support and harbor them, because they're equally as guilty of murder."

How about charging the State Department, then? What do you say, Mr. President?
Posted by Punditarian at 7:27 PM