FRANCE AND GERMANY ISSUE ANOTHER EMPTY WARNING TO ASSAD 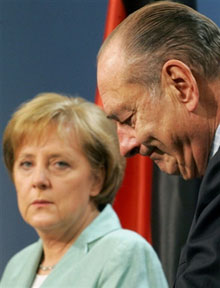 Merkel and Chirac urge Syria not to meddle in Lebanese politics

The leaders of France and Germany yesterday urged Syria not to interfere in Lebanon but to contribute constructively to efforts aimed at bringing peace and stability to its neighbor.

"France and Germany call for an end to all interference in the affairs of Lebanon," German Chancellor Angela Merkel and French President Jacques Chirac said in a joint statement issued after a meeting in Mettlach, Germany.

"They wish that Syria will no longer support forces that want to destabilize Lebanon and the region," the statement said.

THAT OUGHTTA TAKE CARE OF EVERYTHING; YUP... PEACE'LL SURELY BREAK OUT ANY MINUTE, NOW - NOW THAT FRANCE AND GERMANY HAVE MADE THIS URGENTLY CLEAR. YUP, THAT'S ALL ASSAD NEEDED TO HEAR. NOW HE'LL SURELY COOPERATE.

Yeah, sure. This reminds me of that GREAT scene in the movie TEAM AMERICA, where Hans Brix warns Kim Jong Il to stop or the UN will send him a really REALLY strongly worded letter. Sheesh. Who do Merkel and Chirac think they're dealing with!? Assad is a murdering, lying tyrant who understands one thing: BRUTE FORCE. It's long passed time we used some on him.
Posted by Reliapundit at 8:35 PM

Well done...I think you and your readers might enjoy commenting on my blog...hope to see you there

"They wish that Syria will no longer support forces that want to destabilize Lebanon and the region,"

Wishing is what children, and people who have no power, do.

I WISH THE MSM WOULD STOP SUPPORTING THE ENEMY.

i wonder what we can do to speed the day?

I think we're doing it. The more new media grows, the less readers the MSM papers have and the less viewers the MSM news shows have.