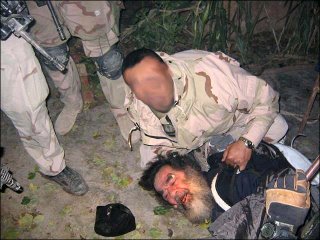 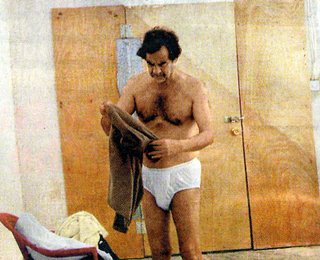 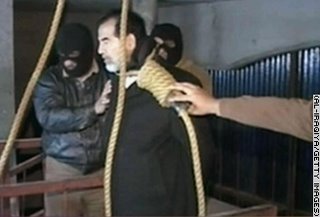 It is altogether fitting that today should begin with Saddam being hanged like the murderous thug he always was - after getting a trial, and an appeal. Tyrants like Saddam deserve to die a million horrible deaths, but at least his ignoble one was swift and severe - like true justice. 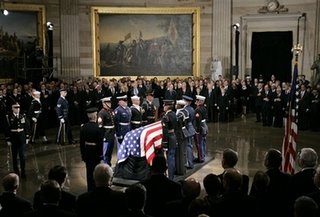 And it is especially poignant that this day should end with the official state funeral for the only unelected president of the United States of America.

A man who achieved the office not by personal ambition or machinations, but by Divine providence.

A man who exercised his limited powers with dignity, honor, honesty, and high moral purpose.

The contrast could not be more stark: on the one hand tonight we witnessed the well deserved solemnity and respect that President Ford received for having faithfully and selflessly served his nation, democracy, the free world, and liberty and justice; on the other hand we witnessed Saddam receiving the well-deserved end of a hangman's noose.
All in all, it was a very good day. We are grateful for Ford's life - and Saddam's death.
Posted by Reliapundit at 8:35 PM

I'd just thought I'd add this: I watched the Ford service from the capitol.

It was very moving.

I did not much like Ford's administration at the time.

And looking back I can see he made two of the BIGGEST political errors of ALL TIME:

he beat Reagan and lost to Carter!

If he'd only lost to reagan then probably the whole world would be a lot better off!

Reagan would have NEVER allowed the Soviet's to think they could invade Afghanistan - so we'd a never had to arm the mujahadeen.

And Reagan would have defended the Shah, allowing his son to succeed him, and we'd have never seen the ayatollah khomeini or a radicalized iran and we'd probably avoided WW4!

But Ford was a good man: honest, sincere, and he meant well.

Even if he'd a still beat Reagan and then beat Carter the world would be a better place!

May Ford rest in peace. And may his family's grief one day be replaced by grateful joy.

Vice President Dick Cheney delivers the eulogy for former President Gerald R. Ford during the State Funeral ceremony in the Rotunda of the U.S. Capitol, Saturday, December 30, 2006. White House photo by David Bohrer Nothing was left unsaid, and at the end of his days, Gerald Ford knew how much he meant to us and to his country. He was given length of years, and many times in his company we paid our tributes and said our thanks. We were proud to call him our leader, grateful to know him as a man. We told him these things, and there is comfort in knowing that. Still, it is an ending. And what is left now is to say goodbye.

He first stood under this dome at the age of 17, on a high school tour in the Hoover years. In his congressional career, he passed through this Rotunda so many times -- never once imagining all the honors that life would bring. He was an unassuming man, our 38th President, and few have ever risen so high with so little guile or calculation. Even in the three decades since he left this city, he was not the sort to ponder his legacy, to brood over his place in history. And so in these days of remembrance, as Gerald R. Ford, goes to his rest, it is for us to take the measure of the man.

It's hard to imagine that this most loyal of men began life as an abandoned child, facing the world alone with his mother. He was devoted to her always, and also to the fine man who came into their lives and gave the little boy a name he would carry into history. Gerald and Dorothy Ford expected good things of their son. As it turned out, there would be great things, too -- in a journey of 93 years that would fill them with loving pride.

Jerry Ford was always a striver -- never working an angle, just working. He was a believer in the saying that in life you make your own luck. That's how the Boy Scout became an Eagle Scout; and the football center, a college all-star; and the sailor in war, a lieutenant commander. That's how the student who waited tables and washed dishes earned a law degree, and how the young lawyer became a member of the United States Congress, class of 1948. The achievements added up all his life, yet he was known to boast only about one. I heard it once or twice myself -- he said he was never luckier than when he stepped out of Grace Episcopal Church in Grand Rapids with a beautiful girl named Betty as his bride.

Fifty-eight years ago, almost to the day, the new member from Michigan's fifth district moved into his office in the Cannon Building, and said his first hello to the congressman next door, John F. Kennedy of Massachusetts. They belonged to a generation that came early to great duties, and took up responsibilities readily, and shared a confidence in their country and its purposes in the world.

Vice President Dick Cheney holds the hand of former first lady Betty Ford as they stand before the casket of former President Gerald R. Ford during the State Funeral ceremony in the Capitol Rotunda on Capitol Hill, Saturday, December 30, 2006. White House photo by David Bohrer In that 81st Congress were four future Presidents, and others who wished for that destiny. For his part, Mr. Ford of Michigan aspired only to be Speaker of the House, and by general agreement he would have made a fine one. Good judgment, fair dealing, and the manners of a gentleman go a long way around here, and these were the mark of Jerry Ford for a quarter century in the House. It was a Democrat, the late Martha Griffiths, who said, "I never knew him to make a dishonest statement nor a statement part-true and part-false, and I never heard him utter an unkind word."

Sometimes in our political affairs, kindness and candor are only more prized for their scarcity. And sometimes even the most careful designs of men cannot improve upon history's accident. This was the case in the 62nd year of Gerald Ford's life, a bitter season in the life of our country.

It was a time of false words and ill will. There was great malice, and great hurt, and a taste for more. And it all began to pass away on a Friday in August, when Gerald Ford laid his hand on the Bible and swore to preserve, protect, and defend the Constitution of the United States. He said, "You have not elected me as your President by your ballot, and so I ask you to confirm me as your President with your prayers."

What followed was a presidency lasting 895 days, and filled with testing and trial enough for a much longer stay. Even then, amid troubles not of his own making, President Ford proved as worthy of that office as any who had ever come before. He was modest and manful; there was confidence and courage in his bearing. In judgment, he was sober and serious, unafraid of decisions, calm and steady by nature, always the still point in the turning wheel. He assumed power without assuming airs; he knew how to treat people. He answered courtesy with courtesy; he answered discourtesy with courtesy.

This President's hardest decision was also among his first. And in September of 1974, Gerald Ford was almost alone in understanding that there can be no healing without pardon. The consensus holds that this decision cost him an election. That is very likely so. The criticism was fierce. But President Ford had larger concerns at heart. And it is far from the worst fate that a man should be remembered for his capacity to forgive.

In politics it can take a generation or more for a matter to settle, for tempers to cool. The distance of time has clarified many things about President Gerald Ford. And now death has done its part to reveal this man and the President for what he was.

He was not just a cheerful and pleasant man -- although these virtues are rare enough at the commanding heights. He was not just a nice guy, the next-door neighbor whose luck landed him in the White House. It was this man, Gerald R. Ford, who led our republic safely through a crisis that could have turned to catastrophe. We will never know what further unravelings, what greater malevolence might have come in that time of furies turned loose and hearts turned cold. But we do know this: America was spared the worst. And this was the doing of an American President. For all the grief that never came, for all the wounds that were never inflicted, the people of the United States will forever stand in debt to the good man and faithful servant we mourn tonight.

Thinking on all this, we are only more acutely aware of a time in our lives and of its end. And we can be certain that Gerald Ford would now ask only that we remember his wife. Betty, the President was not a hard man to read, and to his friends nothing was more obvious than the source of his great happiness. It was you. And all the good that you shared, Betty, all the good that you did together, has not gone away. All of that is forever.

There is a time to every purpose under Heaven. In the years of Gerald Rudolph Ford, it was a time to heal. There is also, in life, a time to part, when those who are dear to us must go their way. And so for now, Mr. President -- farewell. We will always be thankful for your good life. In Almighty God, we place our confidence. And to Him we confirm you, with our love and with our prayers.