The Left calls George W. Bush, BUSHITLER.
They are so wrong it's laughable.

Compared to other presidents the Left admires, Bush is MORE liberal and more of a DOVE!

Lincoln suspended habeus corpus.
But the Left still idolizes him.
Rightly so.
Lincoln knew he had to do whatever it took to defeat the Rebels.
And to put slavery on the road to oblivion.

But the Left still idolizes him.

And they've got a point: FDR ruthlessly fought WW2 - firebombing Dresden, Tokyo - to name just two cities he destroyed along with their civilian populations. FDR dedicated an amount nearly equal to the nation's GNP to build a nuclear bomb - and didn't even ever tell any of his Veeps! He made deals with the likes of Stalin to destroy the likes of Hitler and Tojo. FDR knew he had to do whatever it took to defeat the Nazis.

Bottom-line: FDR deserves adulation and thanks.

AND: NOTHING in Bush's Patriot Act is as anti-libertarian as what Lincoln and FDR did.

And Harry Truman, he was no wimp. He was a good liberal, too: tried to nationalize healthcare and integrated the military.

And, he used TWO Atom bombs to end WW2 - saving a few million of lives our GI's. And perhaps more than ten million JAPANESE lives were saved by his use of the Atom bombs.

Some Lefties decry and deride their use, but they are wrong. They claim he could have demonstrated them on a deserted island. HA! The proof is obvious: Truman had to use two on real cities before the Japanese would surrender. Not even ONE on a real city worked!

Truman knew he had to do whatever it took to defeat the Japanese.

Nothing Bush has done since 9/11 - not in ANY theater of combat - is one one-hundredth as militarily powerful as what FDR and Truman did during WW2.

THEY FOUGHT "NO HOLDS BARRED"; BUSH HAS US FIGHTING WITH ONE HAND BEHIND OUR BACKS.

And then there's the darling of the Left - JFK. In his inaugural, he said we would fight for liberty on any shore. In fact, his inaugural reads like a neocon tract.

JFK started the USA's nuclear arms build up, and tried to slow Soviet enlargement into SE Asia. During the Cuban Missile crisis he told Nikita we would nuke the USSR - and Nikita blinked. It was risky, but JFK knew he had to do whatever it took to defeat the Soviet Union's attempt to put nukes in Cuba.

W is a buddy of Teddy Jo Kennedy - together they passed a HUGE federal spending bill for education.

W is a buddy of Clinton's - though he's not as close to him as his father!

W is an amigo of Mexican president's who want us to relax our immigration laws and give amnesty to illegals.

He is a big believer in the UN.

He believes the Saudis are our allies in the GWOT.

Comparing Bush to Lincoln and FDR and Truman and JFK, THEY ARE CONSERVATIVE HAWKS and George W. Bush IS A LIBERAL WIMP! 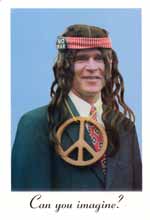 He passed a HUGE increase in domestic spending: for education and drug-benefits for seniors. He wants to give illegal aliens amnesty.

He calls Islam "a religion of peace."

These are not the actions of a hawk or a right-winger.

They are the inactions of a dove and a liberal. And a wimp.

In fact, that's what "W" really stands for.

(PS: MOST OF THE PHOTOS HAVE EMBEDDED LINKS FOR THOSE WHO NEED MORE INFO.)

YUP: I'm fed up with Bush's HALF-ASSERY. I would NEVER EVER VOTE FOR HIM AGAIN.

That is, unless he ran against a DEMOCRAT!
Posted by Reliapundit at 7:00 PM

I'm glad to hear you're fed up, Reliapundit, because so am I.

We haven't made a good move in several years now.

This war is very serious, and we are doing NOTHING to win it.

but president obama would be worse.

as prez kerry would have been.

we need to crank things up a notch.

and we need to eradicate the leftist notion that bush has been an over-the-top hawk.

btw: this is not my first post on this:

The other side is not willing to commit any unnecessary collateral damage, and even warns the other side before a counter-attack. This side has much more powerful weapons, but will not use them. And they are not willing to accept comparatively low numbers of casualties, nor accept a number of casualties which is historically low. And they don't want to fight in any one location for more than a few years. And they expect to win and then change centuries old ethos of their foes in the same period of time.

So, in a war between these two sides... WHICH SIDE WILL WIN? The other side. The enemy. The jihadoterrorists are gonna win unless the entire West adapts its ethos of war - and decides it's gonna stop fighting this war using half-measures and GO ALL-OUT FOR VICTORY.

He saved the lives of 1 to 2 million American soldiers, sailors, and marines.

He saved the lives of 10 to 20 million Japanese.

(Based on the experience on Okinawa and Iwo Jima.)

I have an anecdote about an anti-war protester and a Manhattan Project nuclear scientist.

The nuclear scientist passed an anti-war activist who was parading with a sign saying "Two bombs, Too many".

To which the nuclear scientist replied "One bomb, not enough".

BTW I think keeping the Saudis as "friends" is a good thing for the time being. Similar to being allied with Stalin in WW2. We do know their bad intent. At the same time we need what help they can provide. Especially re: oil prices.

It is in their interest to keep turmoil in the world at just a high enough level to support current oil prices, while not high enough to cause a recession. A tricky balancing act. They do have the advantage of being able to pump more oil if the news gets too grim.

This is more turmoil than we would like. However, every year that the economic expansion continues we gain more than the Saudis do. So it might not be a bad trade off. For now.